Across the Atlantic Ocean

Great Gummies
New Gumbria is a kingdom in Adventures of the Gummi Bears. During the Great Gummi Exodus, when the alliance between Gummi Bears and humans faltered, a little over 500 years before the events of the series, Gummi Glen was evacuated before an inevitable war happened. A Gummi navy aided in the evacuation, where three groups set sail in ships set off in different directions, towards three new lands named Berryborn, Great Bearton, and New Gumbria.

A fourth group of Gummies, much smaller than the rest, elected to stay behind in secret to care for Gummi Glen as well as signal the Gummies when it was safe to return.

It is unknown if Great Bearton or Berryborn were successfully colonized, however when Zummi Gummi and the others use the first Gummiscope in the episode "Light Makes Right", to send signals to all of the colonies, they are only able to confirm successful contact with New Gumbria. Contact is brief though, as the contact device has to be destroyed in order to save Dunwyn Castle from destruction through Duke Igthorn.

In the episode "Up, Up, and Away", Chummi Gummi passes through Gummi Glen in search of the Great Gummies. He eventually continues his journey, flying his airship across the ocean in hopes to get to New Gumbria.

In the second part of the series finale episode "King Igthorn", a second successful contact with New Gumbria is made by the Gummi Glen Gummies, using the second Gummiscope found in the ancient Gummi city of Ursalia.

New Gumbria is the new home of the Great Gummies, located across the Atlantic Ocean. The land is thought to be inhabited by thousands of Gummies. 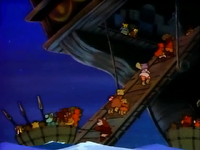 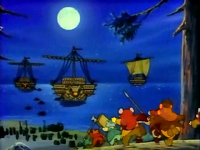 ...and for the other colonies, fleeing in terror... 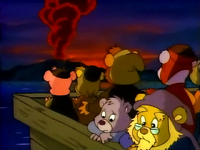 ...from the human hostility on the old continent 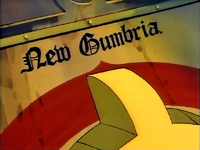 The Gummiscope's dial showing the name of the colony 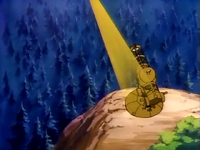 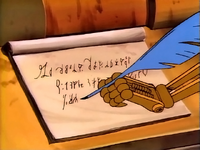 The first message received from the colony

Retrieved from "https://disney.fandom.com/wiki/New_Gumbria?oldid=4476702"
Community content is available under CC-BY-SA unless otherwise noted.