New Hampshire is a state in the New England region of the northeastern United States of America. The state was named after the southern English county of Hampshire. It is bordered by Massachusetts to the south, Vermont to the west, Maine and the Atlantic Ocean to the east, and the Canadian province of Quebec to the north. The state's capital is Concord and its most populous city is Manchester, which is also the most populous city of the three Northern New England states (Maine, New Hampshire, and Vermont). New Hampshire is the 5th least extensive and the 9th least populous of the 50 U.S. states.

It became the first of the British North American colony to break away from Great Britain in January 1776, and six months later was one of the original thirteen states that founded the United States of America. In June 1788, it became the ninth state to ratify the United States Constitution, thus bringing that document into effect. New Hampshire was the first U.S. state to have its own state constitution. 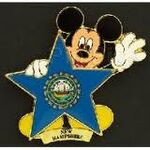 Add a photo to this gallery
Retrieved from "https://disney.fandom.com/wiki/New_Hampshire?oldid=3903640"
Community content is available under CC-BY-SA unless otherwise noted.