Bonkers
"New Partners on the Block"

"New Partners on the Block" is the thirty-second episode of Bonkers. It is notably the last of the Lucky Piquel episodes in production order, and as such, is the last episode with Lucky as Bonkers' partner, with Miranda Wright becoming Bonkers' new partner at the end of the episode, bridging the gap between the two different sets of Bonkers episodes.

Piquel tries go on a case for Fireball Frank solo, and is seemingly killed, but is actually captured with Agent Talson by Frank. Together Officer Miranda and Bonkers rescue the two and arrest Frank. Bonkers' partnership with Piquel is switched with Miranda.

At police headquarters, Chief Kanifky is briefing his officers on an important assignment, but can't seem to find the right paperwork in his pockets as he keeps finding other things. While he struggles to find the right information, Lucky and Bonkers enter the room unnoticed, with Lucky complaining to Bonkers as he's covered in cotton candy and other sweets. As Kanikfy continues his attempts to find the right paperwork, Miranda stands up and helps Kanifky out with finding the right document. After she helps him out, Kanifky spots Lucky, again mispronouncing his last name as "Pickle", and as Lucky sits down, he explains his appearance to be an undercover assignment. As Kanifky accepts that and gets down to business, Bonkers decides to turn up the heat in the briefing room, which causes the cotton candy on Lucky to begin melting. Meanwhile, Kanifky reveals their objective to be the dangerous Fireball Frank, an explosives expert that is being pursued by Special Agent Talson of the Federal Bureau of Investigation (FBI), and is in their area. As Kanifky continues, the popcorn kernels in the cotton candy on Lucky begin to bake off from the heat and start popping off in all directions, drawing Kanifky's attention to Lucky again before the whole mess of cotton candy vanishes as the popcorn pops completely, flooding the back seats with popcorn, much to the annoyance of Lucky and several officers while one engorges himself on it. With Kanifky's final orders to find Fireball Frank and make sure he sees justice, Lucky and Bonkers head back out on patrol.

Figuring out Fireball Frank's love for spicy chili peppers, Lucky goes undercover at the grocery store to look for Frank. Once they find him, they tail Fireball Frank until he is seen heading into a building, but when Lucky decides to try and confront Frank alone, Bonkers tries to talk him out of it or go with him, but annoyed by Bonkers one time too many, Lucky is able to convince Bonkers to remain in the squad car while he went inside alone. However, as Lucky carefully tiptoes through the building to find Frank, he ends up setting off Frank's booby trap, causing the entire building to be destroyed in a massive explosion, powerful enough to shatter the windows on Lucky and Bonkers' cruiser and shred Bonkers' uniform. One of Lucky's shoes flies into the air before crashing back down on Bonkers' head. One look at it in its charred state, and Bonkers fears the worst for Lucky.

The next day, the Stars and Stripes are lowered to half-staff as Lucky is presumed killed in the line of duty, and Bonkers is with Miranda and Chief Kanifky in the Chief's office, devastated at the loss of his partner. Kanifky attempts to console Bonkers with planning a memorial service for Lucky, but his goof of mispronouncing Lucky's last name only results in Bonkers suffering another outburst of tears as Miranda consoles him. After Kanifky reviews his eulogy to Bonkers and gets Bonkers to admit how beautiful it sounds as he has another crying fit, Miranda admits that Lucky sounded like a great guy, and Bonkers admits Lucky was a great partner, even if he was usually in a foul mood every week. Miranda can only admit that Lucky was fortunate to have a partner like Bonkers, before the Chief asks about Lucky's shoe, which Bonkers was wearing around his neck. Though Miranda tries to tell the Chief that Bonkers is in mourning right now, and his suggestion to have at least something of Lucky to bury at the service was a wrong choice of words, Bonkers sadly hands over one of the shoelaces to the Chief to bury as he has another crying fit.

Meanwhile, it is revealed that Lucky and Fireball Frank survived the explosion, but Frank had to move his base of operations to an observatory. As Frank leaves to deal with other matters, Lucky speaks to Agent Talson, whom Frank had taken hostage as well, then attempts to contact Bonkers by writing secret messages on the discarded cans of peppers that Frank left behind and kicking them out the window. Luckily, Fall-Apart Rabbit finds the cans and collects them, mentioning how they can help out the war effort.

Back at Bonkers' house, he's having a dinner with Miranda and all of Bonkers' co-stars in attendance, including Fawn Deer, Jitters A. Dog, Fall-Apart, and Grumbles Grizzly. When Bonkers fishes a can out of his meal, Fawn reprimands Fall-Apart for it, but when Grumbles takes the can and reads Lucky's code words, thinking it was imported, Bonkers realizes the truth that Lucky is still alive, and with the help of Miranda and the others, he finds several cans that spell out a full message, but with no sign of the last one, Bonkers becomes frantic, until Miranda suggests speaking to her superior, Sgt. Frank Grating. However, upon Bonkers explaining the situation to him, Grating throws Bonkers out of his office, refusing to help, but Miranda decides to still help Bonkers anyway.

Together, Bonkers, Miranda, and Fall-Apart return to the area where Fall-Apart found all the cans with Lucky's messages on them, but despite Miranda trying to hard-press Fall-Apart into remembering where the last can is, they fail to find it, and Bonkers sadly departs in his squad car. However, Frank saw Bonkers and Miranda snooping around, and thinking they are on to him, he destroys Bonkers' squad car with an RPG. Bonkers survives, but this results in where he figures out that the observatory is where Fireball Frank is, thanks to Miranda when she returns him Lucky's shoe, and the can with the last of Lucky's messages on it, which was conveniently next to the shoe. Now knowing where Lucky is, he and Miranda go to investigate.

At the same time, Frank has constructed a new explosive device with which he'll use to take Lucky and Talson as hostages and keep them that way until he's in international airspace, thus escaping his crimes and prison time in the USA. However, Bonkers and Miranda arrive on the scene, and when Frank goes to deal with them, Miranda deals with Frank, while Bonkers attempts to retrieve Frank's explosive from Lucky, but ends up activating it. Frank manages to deactivate it, but in the confusion that follows after Bonkers restarts it, setting it to go off in 90 seconds, when Lucky demands to never see it again, Bonkers deliberately eats it, doing just as Lucky asked. While Frank, Miranda, Talson, and Lucky take cover, the bomb blows inside Bonkers, but thanks to Bonkers' Toon physiology, he survives the resulting explosions none the worse for wear. In the scuffle that follows, Lucky catches Frank, but Bonkers mistakes Agent Talson for Frank instead until Miranda proves he caught the wrong guy thanks to Frank's pepper-loaded bad breath. Grating arrives with backup, and is surprised to see Bonkers caught Fireball Frank, but Bonkers says it was a joint effort by him, Miranda, and Lucky.

Back at the precinct, Kanifky congratulates Miranda and Bonkers for a job well done, but faints once he realizes Lucky is still alive and mistakes him for being back from the dead as a ghost. Agent Talson then steps forward to thank Lucky for saving his life and offers him a position with the FBI. Lucky accepts, and later on, as he, Bonkers, Toots, and Fall-Apart clean out his old office since he's transferring to Washington D.C., Bonkers is heartbroken to be saying goodbye to Lucky, but offers Toots to go with Lucky to take care of him in Bonkers' stead. Broderick the Toon Radio soon comes in, suggesting he go with Lucky as well to take care of Toots, and Fall-Apart agrees to come as well, just for the sake of it.

A little while later, Lucky pulls up outside headquarters with his van, and as Fall-Apart, Toots, and Broderick climb in, Miranda steps forth to wish Lucky good luck, but while Lucky thanks her for the good wishes, he suggests she'll need the luck regarding Bonkers. Dilandra and Marilyn say goodbye to Bonkers as well before hopping into the van to join Lucky and the others, and Lucky leaves Bonkers his old badge to remember him by. After struggling to find the right words, Lucky simply tells Bonkers he'll see him around, and with that, Bonkers' old partner departs for his new life serving the United States as a federal lawman from his old role as one of Hollywood's finest. Miranda promises to try and live up to Lucky's expectations as Bonkers' new partner, but while Bonkers believes she has some pretty big shoes to fill, hearing Grating demand that he be in his office at once causes Bonkers to rethink his words.

Meanwhile, Lucky deals with Fall-Apart, Toots, and Broderick chatting up a storm as he drives towards Washington D.C. and his new life, ordering them to be quiet, but Fall-Apart gets the last say as he asks "Are we there yet?" 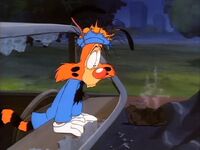 Bonkers thinks Lucky died in the explosion upon seeing Lucky's shoe land in front of him.

Lucky thanks Miranda for her work. 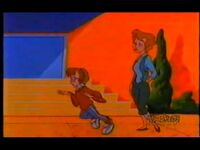 Retrieved from "https://disney.fandom.com/wiki/New_Partners_on_the_Block?oldid=3828610"
Community content is available under CC-BY-SA unless otherwise noted.