Newsies: The Musical is a Disney Theatrical Productions stage musical based on the 1992 film Newsies, which in turn was inspired by the real-life Newsboys Strike of 1899 in New York City. The show has music by Alan Menken, lyrics by Jack Feldman, and a book by Harvey Fierstein. The musical premiered at the Paper Mill Playhouse in 2011 and made its Broadway debut in 2012. In 2013 Disney announced that Newsies would be going on a national tour.

In 2017, a live performance of Newsies was recorded for a limited theatrical release, and was later released digitally.

Newsies The Musical played at the Paper Mill Playhouse in Millburn, New Jersey from September 25, 2011 through October 16. Direction is by Jeff Calhoun, with choreography by Christopher Gattelli. Newsies The Musical contains songs from the movie, as well as several new numbers. The songs "My Lovey Dovey Baby" and "High Times Hard Times" were left out of the stage adaptation. The Paper Mill Playhouse production received many favorable reviews. The Broadway production cost about $5 million to stage.

The musical opened on Broadway at the Nederlander Theatre for a limited engagement starting in previews on March 15, 2012 and officially on March 29, 2012. The engagement was extended through August 19, 2012 after just the first previews. On May 16, 2012, Disney announced that Newsies is now an open-ended engagement.

The stage adaptation writes out Jack's original love interest Sarah Jacobs and the New York Sun reporter Brian Denton, who writes about the Newsboys. They are replaced by the composite character "Katherine Plumber", a reporter whose pen name is explained later in the musical.

It was announced on August 14, 2012, due to his commitments with NBC's Smash, leading man Jordan will exit the musical September 4. It was also confirmed that newcomer Corey Cott (who became the alternate earlier in the month due to Jordan's Smash schedule) will be his replacement beginning September 5.

In the early hours of the morning, in 1899 New York City, newspaper delivery boy, Jack Kelly, tells his disabled friend, Crutchie of his dream to one day leave New York for Santa Fe ("Santa Fe" (Prologue)). Jack lives with his fellow "newsies," many of whom are orphaned and homeless. As the sun rises, the newsies awaken and prepare for another day on the job ("Carrying the Banner"). While buying their supply of papers to sell, Jack meets Davey Jacobs and his little brother, Les. Unlike the rest of the newsies, Davey and Les have a home and a family. They started work as newsies because their father suffered an accident at work resulting in the termination of his employment. Seeing young Les as an opportunity to sell more papers, Jack offers to help the boys. Meanwhile, the publisher of the New York World, Joseph Pulitzer, increases the cost of the newspapers to the delivery boys, so as to outsell his competitors ("The Bottom Line").

Later, Jack, Davey, and Les are chased down by Warden Snyder of the refuge, a juvenile detention center. The boys find cover in a vaudeville-style theatre owned by Jack's friend Medda Larkin. Jack refuses to tell Davey why Snyder was after him. The boys then watch Medda perform ("That's Rich"). While at the show, Jack spots a young female reporter named Katherine Plumber. He recognizes her powerful feminism and immediately shows his respect for her ("Don’t Come A-Knocking"/"I Never Planned on You"). The next morning, Jack and the newsies discover that the cost of newspapers has raised ten cents per hundred. Outraged, Jack organizes a protest ("The World Will Know"). Katherine sees the newsies' strike as an opportunity to become a more successful reporter and decides to cover the protest ("Watch What Happens"). The next day, Jack fails to properly motivate the newsies, as he isn't always the best with words, but Davey steps in and rallies the newsies for a full scale strike against the New York World ("Seize the Day").

The protest is cut short when the boys are engaged in confrontations with the police and Strikebreakers. During the commotion, Crutchie is beaten, apprehended, and taken to the refuge. Jack, upset at the protest's failure and the capture of Crutchie, laments the situation and promises himself that he'll soon leave New York forever ("Santa Fe").

The next morning, Katherine visits the sulking newsies in Jacobi's Deli and cheers them up by showing them that her article about the strike made the front page of the New York Sun. Thrilled, the newsies all rejoice at making the headline and imagine what it would be like to be wealthy ("King of New York"). Meanwhile, Crutchie is still stuck in the refuge ("Letter From The Refuge").

Davey, Katherine, and Les later find Jack hiding out in the basement of Medda's theatre. Davey and Katherine attempt to decide their next move, but Jack refuses to put the newsies in danger again. Davey reminds him that they'll have to take risks in order to get Crutchie back. Jack eventually complies ("Watch What Happens" (Reprise)).

Back at the World, Pulitzer converses with Warden Snyder about Jack while Katherine listens. Snyder reveals that Jack is actually an escaped criminal, originally detained for stealing food and clothing. Jack soon arrives and confronts Pulitzer. During the conversation, Pulitzer reveals that he is actually Katherine's father. Katherine, who was hiding in the room, tries to apologize to Jack for not telling him, but Jack brushes her off as he is led by Snyder into the cellar. Pulitzer offers Jack a compromise: If the strike is called off, he will be cleared of all charges and given enough money to leave for Santa Fe, but if not, he will be sent back to the refuge ("The Bottom Line" (Reprise)). Meanwhile, Spot Conlon, head of the newsies in Brooklyn, brings in his ranks in full support of Jack's protest ("Brooklyn's Here"). It can also be noted that the main reason the Brooklyn newsies arrived so that Spot could shamelessly flirt with Manhattan newsie, Racetrack Higgins. Jack gathers the newsies, and not wanting to put them in any more danger, reluctantly suggests they accept Pulitzer's offer. Davey and the newsies are shocked at Jack and turn their back on him. Jack later meets with Katherine once more and she tells him that despite her namesake, she was always on Jack's side. She also criticizes Jack for not being honest with her about ending up in the refuge for stealing. However, after seeing a drawing Jack made depicting the abuse conducted at the refuge, she realizes Jack stole the food and clothing for the other boys there. The two share a brief romantic moment and Katherine states that "I have something to believe in, now that I know you believed in me". Jack admits that the feeling is mutual, and they kiss ("Something to Believe In").

Jack and Katherine then join Davey and the newsies in printing their own paper; one that will determine the outcome of the strike ("Once and For All"). The newsies' paper is sent to Governor Theodore Roosevelt, who arrives in full support of the newsies' cause. Defeated, Pulitzer compromises with Jack once more. Jack proposes that Pulitzer buy back every paper the newsies fail to sell everyday, thus making him seem more generous and making more boys want to sell papers for him. Pulitzer is reluctant at first, but agrees. Crutchie is freed, Snyder is arrested, the refuge is shut down, and the strike ends. In the excitement of the newsies victory, Jack prepares to say goodbye to Katherine, as he now plans to leave for Santa Fe, but Katherine says that wherever he goes she will go with him. The two share a kiss and Jack elects to remain a newsie. All ends well ("Santa Fe/Carrying the Banner/King of New York" (Finale)).

The Paper Mill production drew critical acclaim. According to The New York Times, " 'Newsies' will open in time to qualify for the Tony Award in a season when the Tony for best musical is seen as up for grabs; 'Newsies' is already considered a likely contender for a nomination even before the show opens..."

In his review of the Broadway production, Ben Brantley of The New York Times wrote: "As choreographed by Christopher Gattelli, they keep coming at us in full-speed-ahead phalanxes, fortified by every step in a Broadway-by-the-numbers dance book... Mr. Jordan...is a natural star who has no trouble holding the stage, even without pirouettes... Mr. Feldman’s lyrics are spot-on, while the melody reminds us just how charming a composer Mr. Menken...can be."

On September 19, 2011 the cast, accompanied by composer Alan Menken, performed "Seize the Day" and "Santa Fe" on The View. The company performed "King of New York" in the Thanksgiving Day Parade in November 2011.

The Broadway cast recording was released on iTunes April 10, 2012 from Ghostlight Records, the CD was released on May 15. The musical has "six songs added for the stage, including three newly written for Broadway since the Paper Mill production. The three new songs are titled The Bottom Line, That's Rich and Something to Believe In." 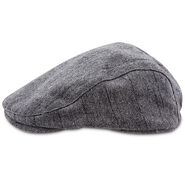 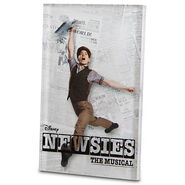 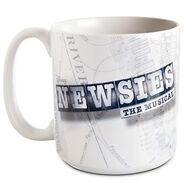 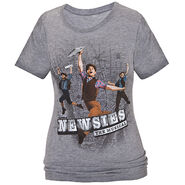 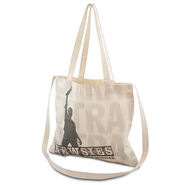 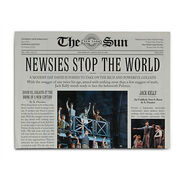 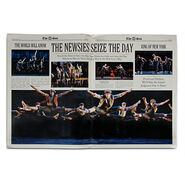 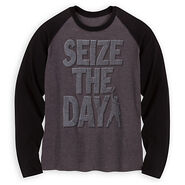 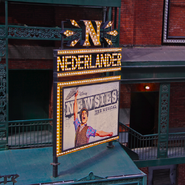