Unreleased
Newt, stylized as newt, is a cancelled Pixar film. It would have been the studio's fourteenth feature film, a place that was ultimately taken by Brave.

Gary Rydstrom was going to make his full-length feature film directorial debut. The film was originally scheduled to be released during the summer of 2011, but was pushed back to 2012, and from there, was replaced with Brave in Pixar's film schedule, with no new release date being announced.

As described in the Disney press release:

"What happens when the last remaining male and female blue-footed newts on the planet are forced together by science to save the species, and they can't stand each other? That's the problem facing Newt and Brooke, heroes of "newt," the Pixar film by seven-time Academy Award® winner for sound Gary Rydstrom, and director of Pixar's Oscar-nominated short, Lifted. Newt and Brooke embark on a perilous, unpredictable adventure and discover that finding a mate never goes as planned, even when you only have one choice. Love, it turns out, is not a science."

At the April 2010 announcement, Disney/Pixar didn't provide an updated release date for newt. Additionally, the film was removed from the official Disney A to Z Encyclopedia supplement by chief archivist Dave Smith. An unsigned message received from Smith's email address stated "The film has been cancelled". This message, along with comments from other industry insiders, led to the speculation that the film had indeed been cancelled. Disney/Pixar animation head John Lasseter "declined to comment", but a separate source from within the studio stated that:

"We have taken newt off of our development schedule to allow our creative teams to focus on these upcoming projects."

Director Gary Rydstrom has since been named the director of the short Hawaiian Vacation,[1] further suggesting newt was no longer occupying his time.

In March 2014, Ed Catmull revealed that before being cancelled, Newt had been turned over to Pete Docter: "Newt was another unlikely idea that wasn't working. When we gave it to somebody new [Pete Docter, director of Monsters, Inc. and Up], he said, "I'll do it, but I have another idea altogether, which I think is better." And we thought it was better too [Docter's concept was the basis of Inside Out, which he is directing for a 2015 release]. That was the reason we didn't continue with Newt."[2] 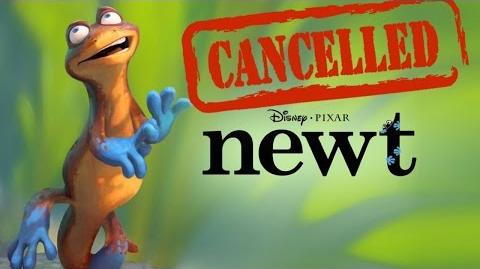 What Happened to Pixar's Newt?