Active
The Nicelanders are a group of pint-sized, boxy characters in Disney's 2012 animated feature film, Wreck-It Ralph and its 2018 sequel. They are supporting characters in the arcade game Fix-It Felix Jr. They inhabit the town of Niceland and play the roles of the innocent bystanders during the game's gameplay. When not in gaming mode, the Nicelanders praise Felix for a job well done, but shun the game's good-hearted villain Wreck-It Ralph out of fear that he will hurt them. Unlike Ralph and Felix, all of the Nicelanders appear to have very choppy animations to mimic the movements of 8-bit game sprites. 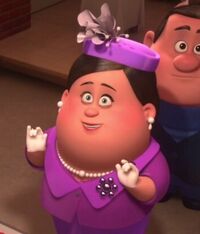 Mary is the most prominent Nicelander, next to Gene. She enjoys baking for her fellow tenants and is the one responsible for preparing Felix's pies and the anniversary cake. With the exception of Ralph, she appears to be on good terms with everyone in the game, so far as to know all their favorite flavors and incorporate them into her cake. Like her peers, she is intimidated by Ralph and sees him just as a bad guy. At the end of the film, however, she shows her newfound appreciation for Ralph by presenting him with his very own cake.

She was voiced by Edie McClurg. 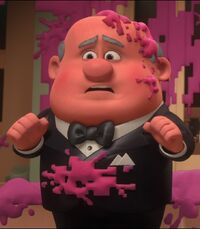 Roy is another prominent Nicelander, known for having a jittery personality. He's often seen to appear rather nervous and is perhaps the most timid Nicelander. He is first seen at the 30th-anniversary party, happily dancing with Felix and the others until Ralph arrives. Throughout the entire scene, Roy was one of the most fearful of the bad-guy. After Ralph smashed the anniversary cake out of anger from an argument with Gene and claims he'll win a medal to prove that he's a good guy, Roy finds it hard to believe, asking Gene if he's serious or not. Gene dismisses Ralph's claims, saying there's no place for a bad guy to win a medal.

He was voiced by Skylar Astin. 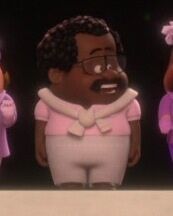 Nolan is one of the most frequently seen Nicelanders, though he doesn't speak often. He seems to be the Nicelander based off the 70s, judging by his attire during the anniversary party. 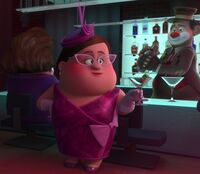 Deanna is a Nicelander within the game Fix-It Felix Jr. She wears plum colored clothing and accessories, including a floral dress, satin gloves, a flowered hat, and cat eye glasses. She is a big fan of Felix, asking him to join her on the dance floor at the anniversary party, but clearly can't stand Ralph, especially when he calls her "Dana".

She was voiced by Rachael Harris. 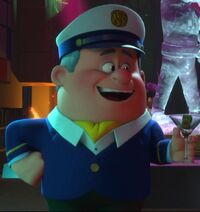 Don is a sea-loving Nicelander that is often found in a captain's hat, ascot, and suit. He speaks with the voice of a stereotype bachelor of some kind. According to the filmmakers, Don enjoys collecting ships in bottles.

He was voiced by Jess Harnell. 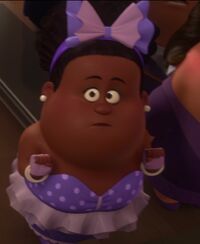 Nell is a Nicelander within the game Fix-It Felix Jr. She has deep chocolate skin, and black hair pulled into a bun and decorated with a purple bow and headband. She wears a matching polka-dot halter top accentuated by a frilly "tutu" around the waist. She is one of the Nicelanders Ralph greets when he crashes the 30th-anniversary party, and one of the few given a name. In the 8-bit introduction at the beginning of the film, it is Nell who jumps up and kisses Felix's cheek before the Nicelanders throw Ralph off the building. 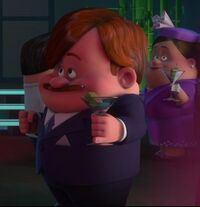 J. Norwood is a Nicelander within the game Fix-It Felix Jr. He is distinguished by his reddish chestnut hair, toothbrush mustache, and blue suit. At the 30th anniversary festivities, he gives Felix a thumbs-up and congratulates him on the party. He is seen again on the dance floor after Gene shouts that Ralph is outside, and he looks at Felix nervously. When Mary is describing her cake, she mentions that J. Norwood's favorite flavor is Red Velvet, and he responds with a giggly "Guilty!" 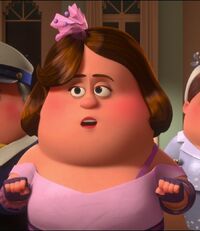 Lucy is one of the female Nicelanders. Her name was only mentioned once by Ralph at the 30th-anniversary party.

In the film, the Nicelanders fail to appreciate Ralph's role to the game, believing that it defines who he is. After Ralph and Felix leave the game, the Nicelanders panic and leave the game to escape its termination from the arcade, save for Gene, who stays a little longer to have a drink and laments to Ralph of what his actions have caused to lead to the game's shutdown. When they learn of Ralph's heroism in saving the arcade, they begin to treat Ralph better. Though Ralph still gets thrown over the building, they reward him with gratitude in-game.

The Nicelanders appear in the sequel, this time making extremely brief appearances. After Sugar Rush is unplugged, at Niceland, Fix-It Felix Jr. and Sergeant Calhoun are seen asking them to adopt the homeless racers, which none of them accept, then Felix and Calhoun adopt all the racers. At the end of the film, the Nicelanders are seen attending parties hosted by other arcade characters.

T-pose renders of the Nicelanders, as shown in a Japanese interview with the animators.

Scrapped Nicelander designs, including a tribute to John Lasseter, by Jin Kim.

The Nicelanders as they appear on the game console.

The Nicelanders cheer on Felix in Game On!

The Nicelanders sadly leave their home in the Little Golden Book.

The 30th Anniversary party in the Little Golden Book.

The group gives Ralph his own cake in the Big Golden Book.