Kyle Johnson
Grace Dell "Nichelle" Nichols is an American actress, singer, and voice artist. She is probably best known for her role as Uhura in the Star Trek franchise, a role she remained with at the personal insistence of the civil rights leader and hero, Martin Luther King Jr, when she considered quitting after facing racist mistreatment at work.

For Disney, she voiced Diane Maza in the animated TV series Gargoyles and the Chief in Buzz Lightyear of Star Command. She also played Amelia Brooks in the 2002 comedy film, Snow Dogs. 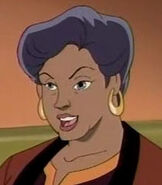 Amelia Brooks
(Snow Dogs)
Add a photo to this gallery
Retrieved from "https://disney.fandom.com/wiki/Nichelle_Nichols?oldid=4361413"
Community content is available under CC-BY-SA unless otherwise noted.