2004-present
Nicholas Joseph Braun is an American actor. He is probably best known for his role as Greg Hirsch in the HBO tv series Succession.

For Disney, he played Zeke Thompson in the Disney Channel Original Movie Minutemen and Edwin in Princess Protection Program. He also played Zach in Sky High and Lloyd Taylor in Prom. 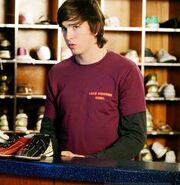 Nicholas Braun at premiere of Prom in April 2011.
Add a photo to this gallery
Retrieved from "https://disney.fandom.com/wiki/Nicholas_Braun?oldid=4034821"
Community content is available under CC-BY-SA unless otherwise noted.