Christopher Stewart
Valarie Stewart
Roger Stewart
Horace Winfred "Nick" Stewart was an American television and film actor, who provided the voice for the blackbird suspect in Who Killed Cock Robin?, Specks Crow in Dumbo, and Br'er Bear in Song of the South (1946) and Walt Disney's Mickey Mouse's Birthday Party (1954).

Stewart was born in New York City and began his career as a dancer before becoming an actor in Broadway shows, like Swingin' the Dream, Louisiana Purchase, and The Reign of Amelika Joe. Stewart became well known for his role as Lightnin' (Willie Jefferson) on TV's The Amos 'n' Andy Show. His other television credits include Ramar of the Jungle, Mister Ed, Ben Casey, and Ironside.

He and his wife Edna founded Los Angeles' Ebony Showcase Theatre in 1950, which provided a venue for numerous performers of all races for nearly four decades.

In 1989, Stewart was called back to Disney to reprise the role of Br'er Bear for the Splash Mountain ride. Disney Historian Jim Korkis asked him if he thought it was at all degrading to play Br'er Bear in Song of the South, regarding all the controversy of the portrayal of African-Americans. Stewart laughed and replied "Disney treated us like Kings". He concluded saying that the money he earned being Br'er Bear in Song of the South went towards a theatre for African-American actors to play roles other than butlers and maids. He also said he was to do the same thing with the money from the Splash Mountain ride.

Stewart died on the Monday of December 18, 2000, at the home of his son Christopher. In addition to his wife and three children, Stewart is survived by three grandchildren. 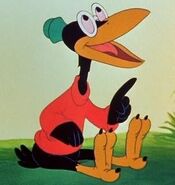 Br'er Bear
(Song of the South, Walt Disney's Mickey Mouse's Birthday Party, and Splash Mountain)
Add a photo to this gallery
Retrieved from "https://disney.fandom.com/wiki/Nick_Stewart?oldid=4455366"
Community content is available under CC-BY-SA unless otherwise noted.