Disney Wiki
Register
Don't have an account?
Sign In
Advertisement
in: Characters, Honey, I Shrunk the Kids characters, Males,
and 13 more

Honey, I Shrunk the Kids
Honey, I Blew Up the Kid
Honey, We Shrunk Ourselves (mentioned)
Shrunk

Honey, I Shrunk the Kids: The TV Show

Nick Szalinski is one of the protagonists from Disney's 1989 film, Honey, I Shrunk the Kids, its sequels, and its 1997-2000 television series.

Nick is the middle child of Wayne and Diane Szalinski. As a child, he was much like Wayne in personality, being interested in science and inventing. He is shown to be very intelligent for his age. As a teenager, he begins to be interested in guitars and develops a crush on Mandy Park, whom he has seen at his job.

Honey, I Shrunk the Kids

Nick is introduced early in the film, having built a small model of Wayne's shrinking machine. When Wayne heads to work, the next door neighbors' son, Ron Thompson, hits a baseball into the attic window. Unknown to anyone at the time, it activates the machine. Ron is forced by his brother, Russ Jr., to confess, and Nick is instructed to take him upstairs to retrieve the ball and clean up the broken glass, much to his displeasure. Upon entering, they are immediately shrunk by the machine, followed soon by Russ and Nick's sister, Amy.

Wayne comes home from a failed conference and destroys the machine in a fit of rage. The kids, now 1/4 of an inch tall, try to stop him but are too little to be seen or heard by him. When he sweeps up the mess, they end up in a trash bag with it in the far end of the backyard.

Nick, Russ, and Ron climb a flower in order to see how far away the house is, knowing that at their size, it would take some time to reach it. Nick and Russ are separated from Ron and Amy when a bee lands on the flower and takes them for a wild ride around the backyard. They later reunite while dodging giant drops of water when Wayne accidentally turns on the sprinkler, though Nick is terrified when Amy nearly drowns in a muddy puddle, before being saved by Russ via CPR and crying thinking she was dead.

Later on, the kids find an oatmeal cream cookie that Nick had left in the yard earlier and quickly begin eating it. They are able to use a piece of it to befriend an ant, dubbed "Antie". That night, they sleep in one of Nick's Legos, with Ron and Nick specifically sharing an area to tease Amy and Russ. During the night, they are attacked by a scorpion but are saved when Antie takes on it, though he dies of its poison. Nick also comforts the devastated Ron, who was close to him.

The next morning, the kids are forced to hide when Nick's friend, Tommy Pervis, comes to mow the lawn (having made a deal with Nick near the beginning of the film). Though they hide in an earthworm tunnel, Tommy stops the lawnmower right over it when Wayne and Diane get his attention. Though the kids end up being sucked into it, they emerge unharmed. However, they barely miss being noticed by Wayne and Diane, who have realized that they were shrunk by now, as they are too small to be heard. Luckily, Quark, the Szalinskis' dog, hears them, thanks to his more acute hearing. They are able to ride and direct him into the house. He does so, but Nick falls in the bowl of Cheerios Wayne is eating. He is barely able to avoid being eaten before Quark nips Wayne in the ankle, causing him to notice Nick in his spoon.

Wayne and Diane alert Russ Sr. and Mae but are unable to recreate the conditions that caused the machine to work. Nick, by this time, has found out that Ron's baseball activated it and got in the ray's path, reducing its power enough to avoid blowing up the targets. He attempts to communicate this to Diane but is only able to when the kids recreate a baseball game to alert them. With this information, Wayne is able to successfully return them to normal size.

The film skips to Thanksgiving, where it is shown that Nick and Ron have become friends. In the end, Nick suddenly gets a joke that Russ told earlier, and begins laughing hysterically.

Three years after the events of the first film, Nick is now in high school, works concessions at a water park, and has an interest in guitars. While he has a crush on a girl named Mandy Park, who he often sees at work, she has no interest in him. While Diane is away helping Amy move into her college dorm, Nick and his two-year-old brother, Adam, are kept by Wayne. One day, he takes them to Sterling Labs where he works; he hopes to get in a secret test run of his new growing machine, with Nick serving as an assistant. When both are distracted by a power surge, Adam gets in the ray's path and is hit. The machine then breaks.

Nick returns home with Wayne, who hires Mandy to babysit Adam later, as he wants to spend time with Nick. Later on, they discover that Adam has grown to 7 feet tall, with his growth fueled by the electric waves of the microwave, which Wayne was using to prepare lunch for him. They try to take him back to the lab to reverse the effect, but are stopped by Wayne's coworker, Dr. Charles Hendrickson, and forced to return home. By this point, Diane has returned and discovers Adam's growth. Nick is left in charge of him, while Wayne and Diane attempt to retrieve the former's shrinking machine to cure him.

Mandy comes to babysit Adam as scheduled and faints upon seeing him. Nick binds and gags her, and promises to remove the gag if she can stay calm. However, she does not do so until he explains the situation properly. However, Adam grows again, doubling in size to 14 feet tall, and escapes from the house. Nick offers Mandy overtime pay if she will help him find Adam, to which she agrees.

Nick and Mandy are later taken into custody when Dr. Hendrickson finds out about Adam's growth and reports it to his boss, Clifford Sterling. However, Adam escapes after another growth spurt and mistakes Nick and Mandy for toys. He puts them in his overalls pocket and heads for Las Vegas. There he roams the Strip, thinking that it is a playground. Nick and Mandy are able to escape into a convertible but are quickly placed back in his pocket when he sees what he thinks is a toy car.

After a successful plan by Wayne, Diane, and Clifford (who by this time has fired Dr. Hendrickson and is helping Wayne), Adam is returned to normal size. However, they forgot about Nick and Mandy, who were still in Adam's pocket. They find them shrunk, but decide to give them a few minutes alone. Mandy then admits she has developed feelings for Nick and kisses him.

Nick does not appear in this film and is stated to be in college or at his own house and has a job. However, his scientific interest is presented as a contrast to Adam, who much more prefers baseball. It is mentioned that he once enjoyed going to Camp Isosceles, a science camp, while Adam is trying to convince Wayne to let him attend baseball camp. According to Diane, Nick hated how it lasted six weeks, as opposed to eight.

Nick, now grown up, is set to return in the upcoming fourth film, having followed in his father's footsteps and became an inventor himself, while still coping with his mother's death. He also has kids of his own now: a son named Theo and a daughter named Maddie.

An older Nick in Honey I Blew Up The Kid 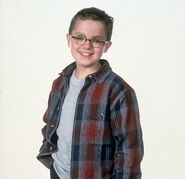 Nick as he appeared in the TV series