2014-present
Nicolas Cantu, known online as Junky Janker, is an American actor, content creator, and animator. He is known for voicing Diego Márquez in the Dora and Friends: Into the City! episode "For the Birds", many appearances in Old Navy advertisements, Curly in the 2017 television film, Hey Arnold!: The Jungle Movie, and is the current voice actor for Gumball Watterson in The Amazing World of Gumball from "The Copycats" onwards.

For Disney, he voiced Rowan Freemaker in LEGO Star Wars: The Freemaker Adventures, Prince James in Sofia the First (replacing Tyler Merna from season 3 onwards), Paco in Future-Worm!, Rorey in Descendants 3 and has starred in two episodes of Walk the Prank. He also voiced B.O.Y.D. in the DuckTales episode "Happy Birthday, Doofus Drake!". He will star as the protagonist of an upcoming Disney animated show.[1]

Cantu has also created a channel on the popular video streaming webiste, YouTube. His channel, known as Junky Janker, has steadily been growing in popularity, due in part to being a participant in Minecraft Monday, a tournament featuring popular creators on YouTube battling against each other in Minecraft mini-games. His channel currently has a few hundred thousand subscribers. 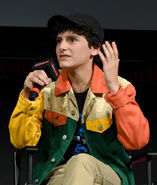