Disney Wiki
Register
Don't have an account?
Sign In
Advertisement
in: Characters, Phineas and Ferb characters, Disney characters,
and 8 more

She is Jeremy Johnson's cousin with an Australian accent who has the same swim suit as Candace Flynn except that Candace thinks Nicolette wears it "better". When Candace and Stacy Hirano overheard her conversation with Jeremy, they thought she was a daredevil who was trying to get Jeremy's attention, though she really was just talking to him about a video game level she was stuck on. ("De Plane! De Plane!")

She appears to have slightly tomboyish interests, based on the fact that she is hooked on an adventurous video game. She very much likes the action of the game as she gets excited as she explains it to Jeremy. However, despite her quick-paced attraction, it is evident that she has a relatively laid back personality. When Candace makes her assumption and tries to show off to "win back" Jeremy. Nicolette attempted to gently correct Candace before being cut-off again. 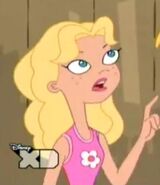