Star Wars: Rise of the Resistance

The Galactic Empire, the First Order

Nien Nunb is a character in the Star Wars franchise. Introduced in the 1983 film, Return of the Jedi, he was brought to life both as a puppet and a costumed actor during the film. Nunb was puppeteered by Mike Quinn and was portrayed by Richard Bonehill in wide shots. The character was voiced by Kipsang Rotich, a Kenyan student who spoke in his native Kalenjin language, as well as in the Kikuyu language. Quinn returned to the role for the 2015 film, Star Wars: The Force Awakens, the 2017 film, Star Wars: The Last Jedi, and the 2019 film, Star Wars: The Rise of Skywalker.

Nien Nunb is an arms dealer of the Sullustan species that joined the Alliance to Restore the Republic during the Galactic Civil War. Three decades later, Nunb is a starfighter pilot in the Resistance who fought in the First Order–Resistance conflict, including the Battle of Starkiller Base.

After the Battle of Yavin, he helped Princess Leia smuggle an enclave of Alderaanian survivors off Sullust and then assisted the princess during the diversionary mission known as Operation Yellow Moon. Later, Nunb served as Lando Calrissian’s co-pilot aboard the Millennium Falcon during the Battle of Endor. Nunb also sent support to Leia in the senate upon learning that she was the daughter of Darth Vader.

Thirty years later, Nien flew with the Resistance at the Battle of Starkiller Base, where he helped to destroy the huge superweapon. He also served at the Battle of Crait, piloting a Ski-Speeder. Nunb piloted the Tantive IV at the Resistance's fight against the Sith Eternal fleet, the Final Order, during the Battle of Exegol. While confronting the Final Order, his ship was disabled when Darth Sidious shot Force lightning into the air in an attempt to stop the Resistance and their allies from attacking the Sith fleet. Sidious is stopped and killed by Rey but Nunb sadly didn't survive Sidious' attack.

Nien Nunb is the assist character for Lando Calrissian, available as a Unique card. 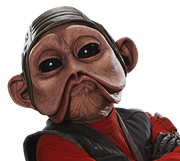 Nien Numb as seen in Star Wars: Return of the Jedi.

Nien Numb as seen in Star Wars: The Force Awakens. 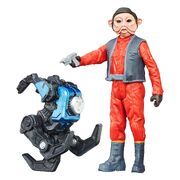