He tries his best to prove to Taranee and her family (especially her mother) that his feelings are pure and of good intentions. After Taranee started spending more time at the Jensen Dance Academy and less with him, they had an argument which leads Taranee to break up with him. Sometimes he's seen back in the comics since the breakup. Red haired Nigel Ashcroft is Taranee's big crush. He has only appeared three times as of,[3] but is expected to make comeback appearances in future episodes. He is a member of Matt's band Wreck 55, which was revealed in the episode "Walk this Way" which also began his relationship with Taranee. However, he is a part-time member of Uriah's gang as shown in [4] and [5] however he is less of a bully than his friends Uriah, Kurt and Clubber, which is why he prefers Matt and Taranee. In recent episodes, he shows his more caring side. He seems to like Taranee for who she is, saying that her "goodness" is what he likes most about her. Nigel and Taranee are basically dating, as he wrote their initials on a statue at school, called Taranee his girl and took her out on a few official dates. Because of his part-time membership in Uriah's gang, Theresa Cook always interferes in their relationship because she thinks Nigel is a bad boy. However when she learned that Taranee and Nigel were framed stealing money from a restaurant, she gained trust in him and had no problems for their one. In the comics, their relation is much more important and serious. 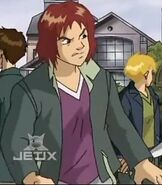 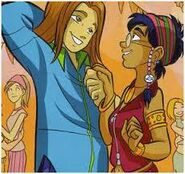