English
Night Crossing is a 1982 Disney film starring John Hurt and Beau Bridges. The film is based on the true story of the Strelzyk and Wetzel families, who on September 16, 1979 escaped from East Germany to West Germany in a homemade hot air balloon during the days of the Berlin Wall when emigration to West Germany was strictly prohibited by the East German government.

The film opens with a brief summary of 1961 mass exodus of East Germany's better people approx. 3,000 daily; events that resulted in the construction of the Berlin Wall and nature of the border zone, featuring stock footage such as Conrad Schumann's jump over barbed wire in Berlin, and including armed guards, silent alarms, barbed wire, automatic machine guns, vicious dogs and land mines.

In April 1978, in the small town of Poessneck, Thuringia, a teenager, Lukas Keller, attempts to escape East Germany by driving a bulldozer through the Inner German Border Zone. However, he is shot by automatic machine guns and is left for dead by the guards; his family is informed while having a picnic with their friends, the Strelzyks and the Wetzels. The Keller family are taken by the police. Finally fed up with his life under the GDR regime, Peter Strelzyk (Hurt) proposes a daring plan to his friend Günter Wetzel (Bridges): they will build a balloon to carry themselves and their families (eight people total) over the border to West Germany. They purchase 1,250 square yards of taffeta (claiming it is for a camping club); Günter sews the fabric together with a sewing machine in his attic and Peter experiments for months to construct a burner. Of course, they face setbacks: fires while trying to inflate the balloon, struggles to build a burner with sufficient power, extremely suspicious neighbors, and doubts about the plan's workability from Günter's wife, Petra.

Eventually, Petra convinces Günter to not go through with the plan. Peter and Günter then stop seeing each other, to avoid suspicion for when the Strelzyks escape. Peter and his eldest son, Frank, complete the burner and, after extensive testing, manage to inflate the balloon. On July 3, 1979, the four members of the Strelzyk family attempt to fly out. They successfully take off, though they are spotted by the border guard (who don't know what to make of it); however, a cloud dampens the balloon and the burner, and they crash within the border zone, only a few hundred feet from the fences, and the balloon floats away. Miraculously, they escape the zone, return to their car and drive home. Meanwhile, the border guard finds the balloon and the Stasi, led by Major Koerner (played by Günter Meisner), begins an investigation to find whoever built it, so they can prevent them from trying again. Initially distraught over his failure, Peter is convinced by his sons to try again, as they did fly and no one was hurt, and now the Stasi will stop at nothing to find them. Peter convinces Günter to help him and both families begin work on a larger balloon to carry them all out. Petra agrees to go with the plan, especially since her mother in West Berlin is very sick.

Having identified the initial launch area, the Stasi begins closing in on Poessneck. The Strelzyks and Wetzels purchase smaller quantities of taffeta from various stores to avoid suspicion, but they are running out of time. In one scene, Peter tries to buy taffeta, claiming it is for his group of Young Pioneers; the manager leaves him to notify the Stasi, prompting Peter to leave the store. They eventually finish the balloon, but have no time to test it. On September 15, 1979, the families prepare to move out while the Stasi finds blood pressure medicine belonging to Peter's wife, Doris, at the place where the first balloon initially landed. They contact the pharmacy and run through all the people whom the medicine is prescribed to, eventually coming to Doris. Their neighbor (a member of the Stasi) identifies them as acting suspiciously; the families leave only minutes before the Stasi arrives at their homes. They reach their launch point while the border is placed on emergency alert.

The balloon is inflated and the burner is lit. Both families climb into the balloon's basket and cut their ropes. A fire is started in the cloth, but it is quickly put out by Günter. As they fly over, the balloon is spotted and Koerner pursues them in a helicopter. Eventually, the burner runs out of propane and they descend; the border guard is mobilized to find them. The balloon lands in a clearing, with all eight people unharmed. Peter and Günter scout to find out where they are. They are found by a police car. Peter asks if they are in the West; puzzled, the police officer says "Of course you are". Overjoyed, Peter and Günter light their signal flare. The families all then happily embrace each other over the amazing success of their journey. 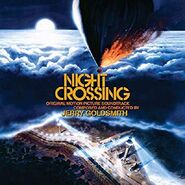 Add a photo to this gallery
Retrieved from "https://disney.fandom.com/wiki/Night_Crossing?oldid=3972334"
Community content is available under CC-BY-SA unless otherwise noted.