Sticky Splats
Smoke Bomb
Giant statue of himself
Night Ninja is the tertiary antagonist (sometimes an anti-hero) from the Disney Junior show PJ Masks. He is one of the nighttime villains. This mysterious figure is almost never involved in actual fighting. Most of the time, he relies on his henchmen, the Ninjalinos, to do his dirty work.

He's a Splat-Sticking, back-flipping Ninja who wants to show everyone that he's the best at everything! Even his team of Ninjalinos must make sure they step in line and let him lead the way on a mission to take the greatest assets of the city like the PJ Masks HQ!

Night Ninja rarely gets involved in a battle as he summons his henchmen, The Ninjalinos, to do his dirty work for him. He's the leader of his Ninjalinos whom he treats like soldiers. However, the episode "Owlette and the Owletteenies" reveals that he has a softer side for his Ninjalinos. Owlette even mentions it, which offends him. He's incredibly arrogant and haughty.

Night Ninja wears a fully-covered navy blue ninja costume with nighttime-like stars on it and teal accents. He has light teal eyes. 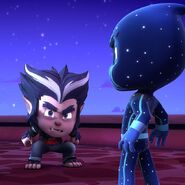