“The last number in our Fantasia program is a combination of two pieces of music so utterly different in construction and mood that they set each other off perfectly.”
―Deems Taylor[src]

At Walpurgis Night (the Witches' Sabbath), Chernabog, god of evil, emerges from the peak of Bald Mountain (in reality Mount Triglaf, near Kiev in southern Russia) to summon all of his minions, including ghosts, demons, hags, and harpies, who dance furiously as he throws them into the mountain’s fiery pit. Chernabog is driven away by the light of the dawn, and a procession of figures walks up a hill to witness a sunrise. It is perhaps the most famous sequences in Fantasia, if not, second to The Sorcerer's Apprentice. The sequence showcases the animation of Vladimir Tytla and the style of Kay Nielsen, as well as the longest shot ever produced in the multi-plane camera (in the procession).

The ghosts join together to become a single mass, swirling around Chernabog, who laughs and summons fire and demons. As the demons emerge and gather below their master, he grabs a number of them and disdainfully throws them into the fires of Bald Mountain, while his other minions dance on. He then uses flames to create images: first, the flames resemble elegant dancers; then, at his pleasure, they transform into dancing barnyard animals. Chernabog then transforms them into blue demons, who dance before him, causing him to grin maliciously. As the dancing continues, it becomes more frantic and chaotic; Harpies fly above the demons, occasionally grabbing them and throwing them into the inferno. 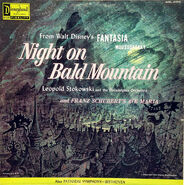 Retrieved from "https://disney.fandom.com/wiki/Night_on_Bald_Mountain/Ave_Maria?oldid=3557470"
Community content is available under CC-BY-SA unless otherwise noted.