1
Nika Futterman is an American actress, singer, poker player, and voice artist who is best known for voicing Asajj Ventress in the Star Wars franchise, Luna Loud in the Nickelodeon TV series The Loud House, and Sticks the Jungle Badger in Sonic Boom. She has provided voices for many Disney characters in films, TV shows, and video games that are listed below. 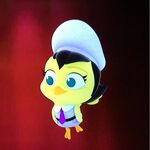 Hanna
(Star vs. the Forces of Evil)