This article is about the 2010 live-action character. For the 1951 animated character, see White Rabbit.

Alice in Wonderland (2010 film)
Alice Through the Looking Glass

The White Rabbit from Alice's Adventures in Wonderland

Page to the Red Queen

Being late, danger, Alice getting caught

Active
Nivens McTwisp (also known as the White Rabbit) is a character in Tim Burton's Alice in Wonderland and its 2016 sequel, Through the Looking Glass.

McTwisp plays a minor role in the film; he first is seen leading Alice to the rabbit hole and successfully doing so. He is next seen leading Alice along with the others to see Absolem and to unroll and read the Oraculum. As the Bandersnatch arrives, McTwisp is captured along with several others and taken to serve the Red Queen; when serving her, in the film he is seen finding the Hedgehog which she uses to play croquet. Further into the film, McTwisp is seen stealing the Oraculum from the Queen and then telling Alice where the Vorpal Sword was; where the Bandersnatch slept. Near the end of the film before the battle, he is seen announcing the battle between the Red and White Queen and then fleeing as he sees the Jabberwocky.

Nivins returns in this film where Alice returns back to Underland during a conversation with the White Queen in Underland where it is explained that Tarrant Hightopp, the Mad Hatter, is in risk of dying. When Alice returns and reports the sad news about the Hatter, Nivins and the rest of Alice's friends react in worry and fear that they would lose their best friend if he dies. Alice is then tasked to travel back in time to find the Hatter's missing family and save his life before he dies to which Alice and her friends travel to Time's Castle to help save the Hatter who is in the risk of dying by using a Chronosphere to travel to the past Horunvendush Day event and save the Hatter's family from death before it is too late, just as Alice's friends wish her good luck in helping save the Hatter.

After the Hatter is brought back to life and Alice makes a plan to find his missing family, Nivins and the rest of Alice's friends arrive at the Red Queen's castle to find the Hatter's family to make him feel happy. Upon arriving, they end up getting jailed by the Red Queen in a jail made of vegetables, much to the Red Queen's notorious plans. Ultimately, a vegetable woman frees them from the jail cell, freeing Alice and her friends in a plan to return to take Time back to his castle and retrieve the Chronosphere to save Underland before it perishes. Nivins and the rest of Alice's friends end up getting engulfed by time rust along with everyone in Underland. With the Chronosphere back in place, Nivins is brought back to life along with everyone caught in time rust. Alice then leaves Underland just as Nivins watches Alice returning to the real world alongside the rest of Alice's friends. 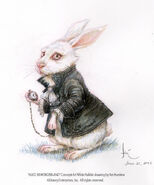 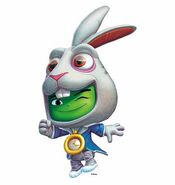 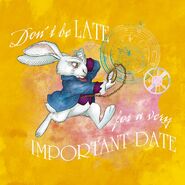 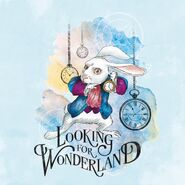