The toys mistakenly think that Donny's new cheetah action figure is sick because she is covered in spots.

Another day in Doc's backyard as Donny plays with his new jungle set with a toy cheetah named Rita as Chilly thinks that Rita has the case of Mystery Pox (from Caught Blue-Handed) as everyone remembers the time when the mystery pox academic got nearly all the toys. 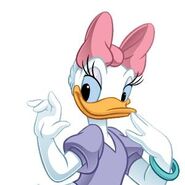 Add a photo to this gallery
Retrieved from "https://disney.fandom.com/wiki/No_Sweetah_Cheetah?oldid=2408641"
Community content is available under CC-BY-SA unless otherwise noted.