In this film, Noah is six months old and has a very minor role. He is seen being looked after by Jackie at various points throughout.

In this film, Noah is five years old. He is first seen timing Buddy as he goes through a makeshift obstacle course that Noah set up in order to prepare him for The Dog Talent Show, which Buddy takes first place in. Later on, when Andrea has set up a dog-washing service in order to earn enough to take a trip to California, he accidentaly lets all the dogs loose when he opens the gate in order to go to their neighbor's yard and return his volleyball. To make up for this, he gives Andrea all the money he has saved up later that night. At the end of the film, he joins her and her volleyball team in celebrating their winning victory.

In this film, Noah is twelve years old and is Buddy's sole owner. At the beginning, he is sad because the time has come for RoseBud, Budderball, B-Dawg, MudBud, and Buddha to be adopted by new owners. When they get kidnapped by Grim and Denning, he enlists the help of Sheriff Bob and Deputy Sniffer to find them. Although, things don't work out so well as Deputy Sniffer is currently without a good sense of smell and accicdentaly leads Noah to a skunk that sprays him.

However, when it turns out the skunk's spray has restored Deputy Sniffer's sense of smell, Noah and his friend, Henry, are able to follow him to Selkirk Tander's winery, where they proceed to rescue the puppies and thwart Grim and Denning by rolling empty wine barrels at them. After that, the puppies move on to their respective new owners and Noah concludes that he may still see them at the park sometimes.

Six-month-old Noah with Buddy and Andrea

Noah and Henry giving the Buddies' balls to Deputy Sniffer

Noah, Henry, and Sheriff Bob getting sprayed by the skunk

Noah preparing to roll the wine barrels at Grim and Denning

Noah and Henry happily watching Grim and Denning get arrested 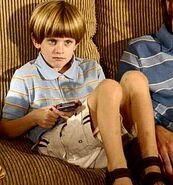