Actress, voiceover artist
Noelle North is an American actress and voiceover artist, who for Disney, was the voice of Cubbi Gummi and Calla in Adventures of the Gummi Bears. She was also the voice of Tammy and Bink in the Chip 'n Dale Rescue Rangers episode "Adventures in Squirrelsitting", and appeared in the made-for-TV-movie Geppetto.

North was born on July 11, 1949, and attended Los Angeles Valley College in the 1970s. She began acting in small roles in films, like Carrie, Farewell, My Lovely, Report to the Commissioner, and Sweater Girls as well as television shows like CHiPs, The Facts of Life, Private Benjamin, Home Improvement, and Police Story.

Outside of Disney, North voice acted in shows, like Rocket Power, Rugrats, Jem, Dino-Riders, Aaahh!!! Real Monsters, The Legend of Prince Valiant, The Mighty Orbots, The Thing, and The Smurfs.

Tree #3
(Adventures of the Gummi Bears) 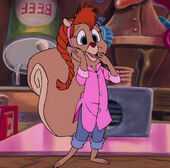