Disney Wiki
Register
Don't have an account?
Sign In
Advertisement
in: Article of the week, Characters, Big Hero 6 characters,
and 12 more

Noodle Burger Boy was manufactured by Krei Tech Industries to be an adorable mascot for Noodle Burger. He was programmed with a prediction algorithm—this allowed Noodle Burger Boy to automatically know what a customer would like to order, after scanning them once. According to Alistair Krei, Noodle Burger Boy's inner-workings are made out of military grade titanium. This is because Krei Tech had resources from an abandoned robot soldier project that was taking up space and needed to be disposed of somehow. Because of this, Noodle Burger Boy is indestructible and therefore dangerous in the wrong hands.

Much like Baymax, Noodle Burger Boy is generally treated as an individual, rather than a machine (except Obake). Fred and the employees of Noodle Burger seem to legitimately care for him; one employee was considerably distraught after Noodle Burger Boy's disappearance.

In "Kentucky Kaiju", Obake uses his minion, Globby, to plant seeds of doubt into Hiro. Noodle Burger Boy is sent out to test the result of this ploy, and learns that Hiro has created a nano suit that grants him super strength. Noodle Burger Boy is later ordered to corrupt Fred's life-sized Kentucky Kaiju animatronic using a CPU chip that Obake designed to override the Kaiju into battle mode, as a way to test Hiro's limits, once again. In the middle of the battle, Noodle Burger Boy retreats, as planned, leaving Hiro to deal with the rampaging robot while Obake observes from his lair. Noodle Burger Boy is later present at the lair with Obake and Globby where his master reviews footage of the battle. As Obake expresses disappointment that Hiro chose super strength, Globby adds that he would've chosen laser eyes. Eager to show off, Noodle Burger Boy shoots his own laser eyes at Globby, narrowly missing him. Obake ordered both his henchmen to remain silent as he observes that Hiro has created nano compression circuitry and remarks that it will backfire on him. Noodle Burger Boy later hijacks the life-sized Kentucky Kaiju Fred made and places a circuit board with Obake's logo on it to enable remote control while he fled the scene and allowed the Kaiju to go on a rampage.

In "Steamer's Revenge", Noodle Burger Boy is present in Obake's lair as his master spies on Big Hero 6 through a hidden camera at Fred's house, where they learn of Baron Von Steamer challenging Boss Awesome. Noodle Burger Boy points out that Steamer would likely derail Obake's plan, but the latter was confident that Big Hero 6 would defeat him. Later on, the robot observes Obake experimenting with converting water into deuterium and starts asking frivolous questions, annoying his master to point where he shuts him off.

In "Countdown to Catastrophe", Noodle Burger Boy and Globby are sent to Krei Tech Headquarters to retrieve an energy amplifier that is supposedly being presented to the public. They battle Big Hero 6 to retrieve the briefcase containing the amplifier. In during which, Noodle Burger Boy inserts a corrupt chip into Baymax's drive that can reprogram him to serve as Obake's servant. Noodle Burger Boy and Globby are successful in their mission, but upon returning to Obake's lair, they discover that the case is empty and the entire presentation was a ploy. Undeterred, Obake sends Noodle Burger Boy, Globby and Momakase to distract Big Hero 6 at SFIT while he retrieves the real amplifier. The mission is a success.

"Internabout" reveals that Noodle Burger Boy survived the destruction of Obake's lair, though he was greatly damaged in the aftermath. He and Trina (whom he refers to as his "big sis") take refuge at an abandoned warehouse, where Noodle stresses his need to go home to Krei Tech so he can be fixed. Noodle forces Hiro to fix him, using Alistair Krei as a hostage. Hiro succeeds, and tries to remove Obake's chip while given the chance, but Trina prevents this. With Noodle Burger Boy's villainous programming still intact, he leaves with Trina.

The original blueprints of the robot that NBB was "recycled" from 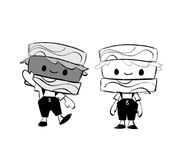 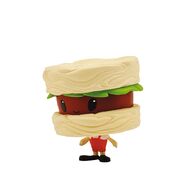