1
Norman Ferguson was an American animator at the Disney Studios. He was known by the nickname "Fergy" by his colleagues.

Rather than focus on inner emotions, Ferguson was known for using broader movements to suggest acting and personality. This technique of animation led to his creation of the dog in the cartoon Chain Gang, the ancestor of Pluto. Ferguson further influenced the character in his animation of a sequence Playful Pluto - in which Pluto accidentally sits on a sheet of flypaper and tries unsuccessfully to pull it off, resulting in more problems - considered by many to be the first sequence in which a character was thinking onscreen and a milestone in personality animation. He was very fond of vaudeville acts and found many opportunities to use broad gestures in his animation assignments, including the dramatic Witch and the theatrical Honest John.

He also had a small role as himself in Disney's The Reluctant Dragon. 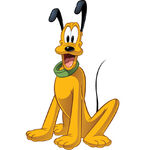 Norman Ferguson with Robert Benchley in The Reluctant Dragon