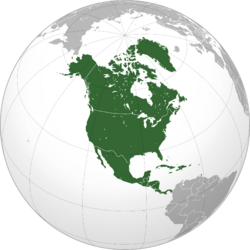 North America covers an area of about 24,709,000 square kilometers (9,540,000 square miles), about 16.5% of the earth's land area and about 4.8% of its total surface. In 2013, its population was estimated at nearly 565 million people in 23 independent states, or about 7.5% of the world's population. Most of the continent's land area is dominated by Canada, the United States, Greenland, and Mexico, with smaller states in the Central American and Caribbean regions. North America is the third largest continent by area, following Asia and Africa, and the fourth by population after Asia, Africa, and Europe.