North Carolina is composed of 100 counties. Its capital is Raleigh, and its largest city is Charlotte. In the past five decades, North Carolina's economy has undergone a transition from heavy reliance upon tobacco and furniture making to a more diversified economy with engineering, biotechnology, and finance sectors. 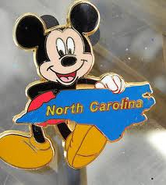 Retrieved from "https://disney.fandom.com/wiki/North_Carolina?oldid=4439445"
Community content is available under CC-BY-SA unless otherwise noted.