Now That's What I Call Disney

Now That's What I Call Disney

The UK version takes songs from the vast Disney library from its animated classics, Pixar films and live-action performances from Hannah Montana and High School Musical. The US version, at 20 tracks, contains songs only from Disney and Pixar animated features.

Idina Menzel's version of "Let It Go" from Frozen is included on the 2014 re-release before the rest of the songs on Disc 1.

The 2017 re-release has "Beauty and the Beast" as the second track (after "Let It Go"), and the version used is from the 2017 live-action remake. "How Far I'll Go" from Moana is the fifth track and placed after "Circle of Life".

The 2021 re-release has both "Into the Unknown" from Frozen II, "Remember Me" from Coco, and the 2019 version of "Circle of Life" from the Academy Award-nominated photorealistic remake of The Lion King as the first, second, and third tracks (respectively) before the title theme song from the original 1991 Beauty and the Beast. "Trip a Little Light Fantastic" from Mary Poppins Returns is placed as the sixth track after Disney Legend Christina Aguilera's ending theme cover of "Reflection" from Mulan. Will Smith's cover version of "Prince Ali", from the live-action Aladdin remake is the seventh track and placed before "You've Got a Friend in Me". "I Can't Let You Throw Yourself Away" from Toy Story 4 serves as the eighteenth track and placed after "Can You Feel the Love Tonight" from the original Lion King. "I Think I Kinda, You Know" from the Disney+ original series High School Musical: The Musical: The Series is placed, after "The Best of Both Worlds" as the twentieth track.

The 2021 re-release includes "Born to Be Brave" from High School Musical: The Musical: The Series, which is placed as the second track after "Let It Go". The Academy Award-winning animated feature short film Winnie the Pooh and the Blustery Day replaces The Tigger Movie on Disc 2, as the song dates back to 1968. "Un Poco Loco" from Coco is placed as the fourth track after "Kiss the Girl". "Speechless" from the Aladdin remake is placed, after "That's How You Know", as the sixteenth track. "When We're Human" (which was previously included in the original Now That's What I Call Disney Princess) serves as the nineteenth track after "I See the Light".

On the 2014 re-release, "Belle" from Beauty and the Beast, "Man or Muppet" from The Muppets, and "Let's Go Fly a Kite" from Mary Poppins replace "Best of Friends", "Digga Tunnah" and "Let's Get Together".

The 2021 re-release also includes the Best Original Song Oscar nominee "The Place Where Lost Things Go" from Mary Poppins Returns as the twelfth track, being placed after "Part of Your World".

Reviews for the UK edition say it's "pretty hard not to love this album"[9] and "a perfect Christmas treat for anyone with children, grandchildren or a sense of nostalgia".[10]

In his review of the US version for Allmusic, John Bush claims that the album "is understandably heavy on films that came after Disney's '90s renaissance," but also says "the collection finds plenty of space for songs from the earlier generation of Disney classics."[3] 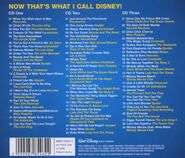 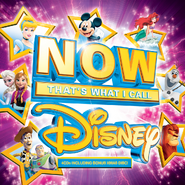 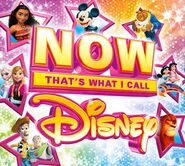