Disney Wiki
Register
Don't have an account?
Sign In
Advertisement
in: Characters, Up characters, Males,
and 6 more

U.S.A.
Nurse A.J. is a minor character in the 2009 Disney/Pixar animated feature film Up and one of the two main characters of the exclusive bonus animated short, George & A.J. He is mostly seen with his colleague George and works at Shady Oaks Retirement Village.

A.J. is a nurse from Shady Oaks, that asks Carl to come with them. He, along with his colleague George, soon watches him in shock flying his house.

A.J. is one of the two main characters in this short film. After leaving Carl's residence, where he flew his house away, A.J. and his colleague, George, are still trying to ask the elderly to join Shady Oaks. But all of them escape, in different ways. For instance, one house got pulled away by cats, and another went to float on water. Soon after, they return to Shady Oaks, and soon come to realise that the elderly there are escaping also. As it goes off into the distance, Carl and Russell, return in the Spirit of Adventure with Dug who speaks in front of A.J., making him and George gasp. 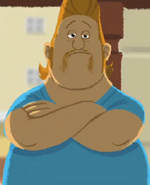