Fantasia
The Nutcracker and the Four Realms

At Home With Olaf

Lang Lang (The Nutcracker and the Four Realms)

"Toccata and Fugue in D Minor"

“You know, it's funny how wrong an artist can be about his own work. Now, the one composition of Tchaikovsky's that he really detested was his Nutcracker Suite, which is probably the most popular thing he ever wrote. It's a series of dances taken out of a full-length ballet called "The Nutcracker", that he once composed for the St. Petersburg Opera house. It wasn't much of a success and nobody performs it nowadays, but I'm pretty sure you'll recognize the music of the suite when you hear it. Incidentally, you won't see any nutcracker on the screen, there's nothing left of him but the title.”
―Deems Taylor[src]

The Nutcracker Suite is the second segment of the 1940 Disney film Fantasia.

The Nutcracker Suite, a selection of pieces from Tchaikovsky's now-classic Christmas ballet The Nutcracker, is a personified depiction of the changing of the seasons; first from summer to autumn, and then from autumn to winter. As Master of Ceremonies Deems Taylor points out, there is no "nutcracker on the screen; there's nothing left of him but the title." Unlike the original ballet, this version has no plot. It features a variety of dances, just as in the ballet, but done so by animated fairies, fish, flowers, mushrooms, and leaves; no actual nutcracker is ever seen in it. Many elements are rendered carefully and painstakingly using techniques such as dry brush and airbrush. The musical segments are as follows:

As dawn breaks over a meadow, during the "Dance of the Sugar Plum Fairy", tiny fairies sprinkle dew drops on every flower and stem.

A cluster of tiny mushrooms, dressed in long robes and coolie hats resembling Chinese (plus a little one always out-of-step), perform the "Chinese Dance".

Multicolored blossoms shaped like ballerinas perform the "Dance of the Reed Flutes".

A school of underwater goldfish performs a graceful "Arabian Dance".

In the final musical segment, "Waltz of the Flowers", autumn fairies color everything they touch brown and gold with their wands. Then the frost fairies arrive and everything becomes part of an icy, jewel-like pattern among falling snowflakes.

One quaint novelty of the full-length roadshow version of Fantasia is that during his commentary on the Nutcracker Suite, Deems Taylor observes that the complete ballet "wasn't much of a success and nobody performs it nowadays." The United States did not see a complete staging of the ballet until 1944, four years after Fantasia was released, and George Balanchine's 1954 staging with the New York City Ballet established the modern tradition of performing the ballet at Christmas. 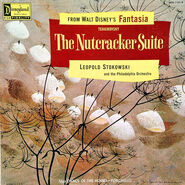 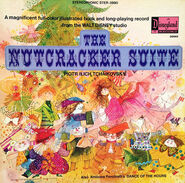 The Nutcracker Suite, Op. 71A, Dance of the Reed Flutes (Irwin Kostal Re-Record 1982)

The Nutcracker Suite, Op. 71A, Waltz of the Flowers (Irwin Kostal Re-Record 1982)