Mickey tries desperately to find the perfect view at the World Cup final in Brazil.

After finding his seat, a morbidly obese pig wearing a multi-coloured wig sits down right in front of Mickey, obstructing his otherwise perfect view. Mickey politely asks him to remove his wig and the pig acquiesces. However, what Mickey didn’t know was that under the wig, was an even bigger mass of hair – a humongous brown afro! Using his vuvuzela as a periscope, Mickey finds an empty seat on the other side of the stadium.

Mickey burrows through the crowd en route to his new seat but his success is short lived as a spirited rendition of the wave throws Mickey out of his seat and onto England’s bench. The team doesn’t take too kindly to having an intruder on their bench and they immediately jump Mickey. In Mickey’s haste to escape, he finds himself on the pitch and right in the middle of the action.

After dribbling the ball down the field, he and the soccer ball are kicked right into the teeth of England’s defense. The goalie catches Mickey and throws him out of the stadium. Alone and dejected, Mickey is left to only listen as the stadium rocks with excitement. Having all but given up, Mickey stumbles across a few balloons and has an idea! He ties them to a chair and makes a flying seat which he uses to float above the stadium to watch the remainder of the match… or so he thinks. A flock of red birds appear and immediately pop Mickey’s balloons leaving him in a freefall, hurtling towards imminent death.

It’s here that Mickey’s luck finally changes as he softly lands in the very same afro he tried so hard to avoid. Now having the best seat in the house, he is able to witness the game winning goal as Brazil wins the Cup. 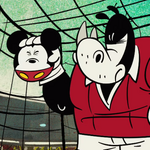