Mickey attempts to woo Minnie over the course of a busy day in Venice, Italy.

The people ride the gondola while Mickey rows in Venice, Italy, he saw Minnie, who gets a flower, a man's boat hits Mickey's boat, he shouts while he gets dizzy and shakes his head. He goes to see Minnie, who is left and the hippo wants to love him, who is left. He steps on three poles, sees Minnie, who puts plates on a table, and kisses the hippo's hand. Minnie puts spaghetti meatballs on a plate on a table, Mickey sees her, he gets flowers, she wants to get the last meatball back, he kneels on a table, "Maritino!" the hippo said, he carries her butt, too heavy to go out and splashed on the water.

Minnie washes the dishes but Mickey saw her, he plays romantic music to sing, he hears the pan clanging by a bear, a hen clucking, a baby crying and lots of loud noises. He is bad but he wants to sing, they are happy but Minnie is so happy, then, Willie comes out to sing the last verse of the music, Minnie thanks him and Mickey is disappointed.

In the evening, Mickey sees Minnie, who puts two cups on a table, he pulls a rope to start his engine, he kicks the gondola, the hippo wants to find him, hangs the cloth hanger high, spinning up as his oar between a wall and a window, steps on three spires at the church, uses an umbrella to spin back, steps on two spires at "It's a Small World", bounces a white fabric curtain on a boat, jump high to read "Ciao Bella", Minnie saw a text but he is handsome, kind, and gentle, and hits a wall. A sailor hits Mickey's face, he hits another sailor's boat, Mickey falls into the water, the sailors are bad to give her up.

The It's a Small World clock tower makes a cameo appearance. 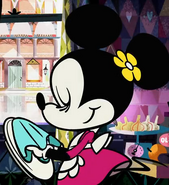 Retrieved from "https://disney.fandom.com/wiki/O_Sole_Minnie?oldid=4102300"
Community content is available under CC-BY-SA unless otherwise noted.