Oakes Fegley is an American child actor. He is known for his supporting role as Paul Swann in the film, Fort Bliss and for playing Samaritan's human avatar Gabriel in the series Person of Interest. He is the older brother of Winslow Fegley.

For Disney, he played Pete in the 2016 version of Pete's Dragon.

Oakes Fegley at premiere of Pete's Dragon in August 2016. 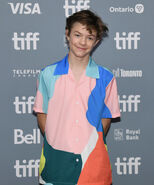 Oakes Fegley attending the 2019 Toronto International Film Fest.
Add a photo to this gallery
Retrieved from "https://disney.fandom.com/wiki/Oakes_Fegley?oldid=3988935"
Community content is available under CC-BY-SA unless otherwise noted.