Gargoyles
Once Upon a Time (in an illustration)

Lord Oberon
Oberon, also known as Lord Oberon, is a minor character from the Disney animated television show, Gargoyles. He is the leader of the Children of Oberon. He is the son of Mab, whom he deposed of as the ruler of Avalon, and currently resides there with his wife, Queen Titania and the Avalon Clan.

Oberon was the son of Queen Mab. He eventually overthrew his supposedly insane mother, but no details of their power struggle are known, although Mab did supposedly not die.

Oberon was once married to Lady Titania, but her frivolous actions caused them to separate for many centuries. As a means of her and the rest of the Third Race to "learn humility," Oberon passed an edict expelling all of his people from Avalon until the time of "The Gathering," a time when they all would return to Avalon, and then left himself. What he did during this time is unknown.

Oberon has two children with Titania, one male and one female, and fathered at least two sons with mortal women: Merlin and an unknown changeling boy.

When Oberon returned to Avalon as a prelude to "The Gathering" and at the behest of the Weird Sisters, he discovered that "his island" had been occupied by the Avalon Clan of gargoyles. Disturbed by this, he attempted to remove them, but was thwarted by his wife Titania, the gargoyle Goliath and an iron bell forged by Elisa Maza, Tom the Guardian and Princess Katharine. Following this, he remarried Titania and proclaimed that the Avalon Clan were his new palace guards and that the magic of his children would not affect any of their clan.

His motives and behavior are often amoral and hypocritical at best. While he was generous enough in sparing the Avalon Clan their lives and allowed them to stay on Avalon, his impudence and short temper contradicted his own edict of staying out of human affairs such as when he assisted his wife Titania in attempting to kidnap David Xanatos' son, Alexander, to Avalon. In the process, he battled Goliath for the second time violating another edict of his that his magic would not affect him or his clan. Upon returning to Avalon following the battle, he made a thinly veiled threat at the Manhattan Clan, leaving his relationship with him and Goliath and his clan open to question to whether or not he is a friend or foe.

Oberon doesn't appear on the show. However, he was represented with Titania into an illustration from Henry Mills' fairytale book, implying his existence.

Unlike all human magic-users and the most of the Third Race, he does not need targets of his magic to see or hear him for it to be effective. Even with reduced power, or when physically weakened, he is still a very powerful and formidable opponent. Because of such power, he tends to be very arrogant, impudent, and very short-tempered although he has shown a generous and noble side to himself and is willing to compromise.

Oberon is one of the strongest and most high-level individuals in the Gargoyle series. Only his mother, Queen Mab's magical strength and abilities are far much greater than his. Regardless, he was still able to overthrow her (and maybe Titania is as powerful as he is, although she usually stays in the background). He has displayed a vast repertoire of magical powers, such as:

Greg Weisman revealed that Oberon can do anything he can imagine. The only limits to his powers are the common weakness of all fairies to iron and the laws Oberon himself has made. 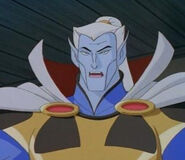 Retrieved from "https://disney.fandom.com/wiki/Oberon?oldid=4415002"
Community content is available under CC-BY-SA unless otherwise noted.