Hulk and his friends
Obnoxio the Clown (real name unknown) was a man who moonlighted as a clown. He owned his own television program from decades past, Obnoxio was the source of Rick Jones fear of clowns since he was little, as a result it became the form Null the Living Darkness took on when facing him.

The Agents of S.M.A.S.H. receive old television signals including a TV show starring Obnoxio which freaks A-Bomb out. He somewhat appears later in the episode as an part of an illusion caused by the Null the Living Darkness that releases people's fears where Null unleashes this illusion on A-Bomb.

obnoxio is a goofy and kind of savage clown, he tries to scare a-bomb by dressing him up like a clown, and he's kind of a fighting cause he punched hulk and the silver surfer.

obnoxio has all the goofy abilities that a clown would have, he can shoot cotton candy out of his mouth, and he can make stuff come out of his hat. 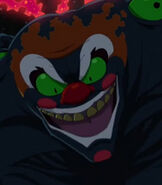 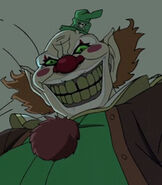 Add a photo to this gallery
Retrieved from "https://disney.fandom.com/wiki/Obnoxio_the_Clown?oldid=3772250"
Community content is available under CC-BY-SA unless otherwise noted.