Being sailed upon, Moana, peace within the world, goodness

“The ocean is a friend of mine!”
―Moana to Heihei

The Ocean is a supporting character in Disney's 2016 animated feature film Moana. A magical entity, the ocean has a high level of anthropomorphism that allows it to interact with the world around it. When the islands of Polynesia fall victim to a devastating curse, the ocean partners up with a young islander named Moana to end the plight. Over the course of the journey, the ocean becomes one of Moana's most trusted and significant companions.

The ocean was the first entity to roam the earth. When the world's first island emerged as a goddess known as Te Fiti, countless new islands were created with the ocean serving as the force that connects them all. After the heart of Te Fiti was lost at sea, resulting in the world being plunged into darkness, legends foretold that the ocean would one day choose an individual worthy enough to restore the heart and save mankind from destruction. Over the course of a millennium, however, these legends were thought of nothing more than fictitious stories. The only one who saw any truth within them was Tala, an eccentric woman living on the peaceful island of Motunui. Tala kept the stories alive by teaching them to the younger generations, including her granddaughter Moana, who felt drawn to the sea since her earliest years as a toddler.

The ocean has a mind of its own and can form its water particles into a tentacle-like appendage to grab objects. It will also use this method to mimic human traits such as head-nodding or high-fiving, as a way to communicate with Moana and her accomplices. At night, the ocean illuminates when emerged, giving off a glow similar to the light emitted from spirits of the deceased.

During the creative team's visit to the Pacific Islands, the filmmakers learned from interviews with the native people that they felt a personal relationship and closeness with the ocean, and how the ocean itself was regarded as though it was alive. The filmmakers were then inspired to make the ocean a character to reflect this idea.[1]

Though loyal and utterly faithful to its companions, the ocean does not follow the commands of others. It is completely independent, and will only act when it considers the circumstances absolutely necessary. To Moana, the ocean acts very much as a paternal guardian and is extremely supportive. Being responsible for choosing Moana as the world's savior in the first place, the ocean sticks by her side throughout the entire adventure. However, it is not entirely cooperative. Instead of helping Moana at every turn (which a force as great as the sea has the power to do) the ocean will only assist Moana after she has tried accomplishing a goal, herself. For example, when Maui escapes his island and leaves Moana floating in the sea, the ocean does not transport Moana to the stolen boat until after she attempts to swim to it on her own. Additionally, during the battle with Te Kā, the ocean does not fight the lava demon, rather it allows Moana to best the demon with Maui's aid, only helping after the two have fully committed themselves to doing so. It is not the ocean's job to save the world; it's only purpose in the adventure is to assist, and it acts accordingly.

The ocean is capable of expressing frustration as well, particularly with Moana's chicken sidekick Heihei; after the bird falls off the boat one too many times, the ocean responds by placing him in a basket, slapping the lid on the basket, nudging it into the storage compartment and slamming the lid shut with an air of finality.

Maui appears to know the ocean quite well and provides some insight to its motivation to restore Te Fiti's heart; Maui notes that the ocean loved when he pulled up islands, as Moana's ancestors would sail across the sea to find them. The ocean enjoyed this feeling of purpose, and hoped to relive the experience once the world was safe from Te Kā's curse.

Since her days as a toddler, Moana was drawn to the sea. During one of her trips to the shore, she noticed a beautiful seashell and wanted to take it. Not far from the waters, however, a newly hatched sea turtle was having trouble getting to the sea, as a flock of birds threatened to eat it. The ocean challenged Moana's empathy by tempting her to choose between the shell and the sea turtle; she chose to save the latter. Moana's selfless act prompted the ocean to choose her as the world's "chosen one" and revealed itself as a sentient being. The ocean and Moana play together and form a bond, before the former gifts the latter with the heart of Te Fiti. Moana's father, Tui, calls out for his daughter, prompting the ocean to return her to shore and hide itself. As Moana is taken back to her village, she drops the heart, which is recovered by her grandmother, Tala.

As the years passed, Moana remembered her experience with the ocean, but assumed it was merely a dream. When Gramma Tala believed the time was right, she used her dying day to prepare Moana for her journey across the sea. Tala tells her granddaughter that she was chosen by the ocean. On queue, the ocean makes a dramatic return and playfully reunites with Moana. Shortly afterward, Tala passes away, but not before leaving instructions on how to find Maui and enlist him on the journey to find Te Fiti and restore the heart. Moana takes one of her ancestor's boats and sails off into the night. Accompanied by the stowaway rooster Heihei, Moana journeys to find Maui's island, but her boat flips over during the search. At Moana's request, the ocean creates a massive storm that shipwrecks her and Heihei to Maui's island.

Moana berates the ocean at first, trying to kick it in anger but it mischievously trips her instead, but soon realizes where she and Heihei had ended up: Maui's island. Though Moana is grateful to be there, she is still a bit miffed at the methods used by the ocean to get her there. They meet Maui, but he refuses to join the mission and instead steals Moana's boat. The ocean transports Moana to the stolen canoe in little time. Though Maui repeatedly throws Moana back into the sea, the ocean returns her each time. Eventually, Maui tries to leave himself, but the ocean prevents this as well and indicates that it is willing to keep doing it until he agrees. They soon reach an agreement to return the heart, and after recovering Maui's lost fish hook, they make their way to Te Fiti. On the way, the ocean forces Maui to teach Moana how to sail and navigate by paralyzing him with a Kakamora blow-dart, forcing him to teach her so they don't sink and much to his chagrin.

Maui battles Te Kā but is defeated. Moana nevertheless tries to bypass the lava demon, but this nearly gets them killed. Maui blocks Te Kā's blow with his hook, and this sends them into the blackness of the night and far from Te Fiti's shores. Maui's hook is severely damaged, and he blames Moana for the disaster. Turning into a hawk, Maui backs down from the mission and takes his leave. The ocean arrives to comfort Moana, who asks why she was chosen in the first place. Feeling she's failed, Moana tearfully requests that the ocean choose someone else to restore the heart. Respecting her decision, the ocean takes the heart back into the sea.

Moana is encountered by Gramma Tala and her ancestors following her decision, and their meeting reinvigorates the former, prompting her to dive into the sea to reclaim the heart. She and Heihei sail to Te Fiti and confront Te Kā. The lava demon nearly consumes Moana, but she is saved by Maui, who has had a change of heart. As Maui battles Te Kā, Moana heads for Te Fiti. Seeing Moana intrude, the lava monster throws a fireball to stop her. The ocean blocks its path and safely gets Moana to Te Fiti's shore. She cannot find the spiral in which the heart is to be placed, but looks into the distance and notices it to be on Te Kā's chest. Moana orders the ocean to part for Te Kā, and it responds immediately. Moana and Te Kā confront each other, but the former manages to tame the lava demon. The heart is then placed on Te Kā's chest, restoring her to the form of Te Fiti.

Te Fiti undoes the curse placed upon the world, and restores Moana's canoe. She and Heihei bid Maui farewell and return to Motunui. After they disembark, Heihei walks back towards the sea, though the ocean redirects him to the village. During the epilogue, the ocean gifts Moana with the seashell from their first meeting, which she places on Motunui's sacred mountain to signify her role as chief. Her tribe was last seen sailing across the ocean in search of new islands.

In the Moana short Gone Fishing, the ocean helps Moana foil Maui's attempts to catch and eat a parrotfish.

In the As Told by Emoji retelling of Moana, the ocean's character was represented by text bubbles seen on smart phones.

In Ralph Breaks the Internet, Moana summons the ocean during the climax; Ariel then dives into it and swims to create a swirl formation. Elsa then freezes the water to create an icy slide for Wreck-It Ralph to land on. 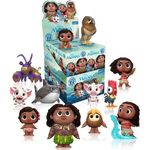 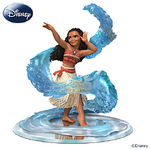