Miles from Tomorrowland
"Ocean in Motion"

February 6, 2015
"Ocean in Motion" is the first segment of the second episode of Miles from Tomorrowland. It premiered on February 6, 2015 alongside "Explorer Exchange".

Miles and M.E.R.C. are flying through the halls when Miles falls off his Blastboard and it crashes in Loretta's room, to her annoyance. Suddenly, Admirals Watson and Crick call and assign them on a mission to find out why the solar station at Kalandra disappeared the night before. The Callistos set out immedetely, but Loretta is still mad at Miles. When they arrive, they find the solor station gone so they split up to find it. They find it and discover that what made the station disappear was a flood from the water on Kalandra's brother planet, Aldora, that occurred on Kalandra's night time.

The theory instantly proves right when a flood that they escape just in time occurs. All the sights they see in the water leave them amazed. They eventually come up with a plan to escape that they execute while the water is in transition between the two planets and it works. After they get back, they make their report to the Admirals and Loretta and Miles reconcile. 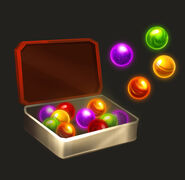