Charlie Mae Annable
Odette Juliette Annable (née Yustman) is an American actress and voice actress. She is best known for her roles such as Dr. Jessica Adams in the Fox medical drama series House.

For Disney, she voiced Chloe in the 2011 Disney direct-to-DVD comedy film, Beverly Hills Chihuahua 2 and its 2012 sequel (replacing Drew Barrymore). She also played Joanna in the 2010 Touchstone Pictures film, You Again, Courtney in the ABC Studios series Monk, Aubrey Diaz in the ABC series October Road, Adrienne in the ABC series Life on Mars, Annie in the ABC series Brothers & Sisters, and Trudy Cooper in the ABC series The Astronaut Wives Club. She even voiced Señorita Marisol in the Elena of Avalor episode "Crystal in the Rough". 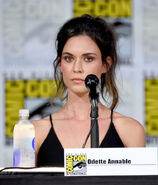 Odette Annable speaks at the 2017 San Diego Comic Con.
Add a photo to this gallery
Retrieved from "https://disney.fandom.com/wiki/Odette_Annable?oldid=4048947"
Community content is available under CC-BY-SA unless otherwise noted.