English
Off His Rockers is a 1992 Disney animated short film directed by Barry Cook (who would later go on to co-direct Mulan). It was originally released with Honey, I Blew Up the Kid (and appears on the LaserDisc release of the aforementioned film). This short was an experiment in having traditionally animated and computer-generated characters share the same environment, which would be later utilized in Aladdin.

The story of an old fashioned rocking horse who tries to regain the affection of a boy whose attention has turned to video games.

The short begins with a young boy playing a video game on the TV. Inside the closet, a rocking horse walks out, and tries to grab the boy's attention. However, he realizes that the boy's eyes are frozen solid onto the TV screen, and pays little heed to the horse's precense. When the horse bounces in front of the boy, but he ends up hitting the wall. Sadly, the vibration from the horse hitting the wall still odesn't affect him. When the horse stands himself back up, he realizes that one of the rocker's on his legs fell off. Because of this, he decides to remove his other rocker, with it flying onto the boy's head, but he still remains unfazed.

When the horse fails to catch the boy's attention once again, he does a dance in from of him, where he purposely kicks the TV into the closet, which snaps the boy out of his hypnotized state. However, instead of being happy, the boy is actually upset. Thinking that the boy doesn't like him anymore, he sadly walks away to put his rockers back on. While doing so, the boy retrieves the TV, and plugs it back in. While tring to find his video game controller, he finds it in the closet. While walking over to grab it, he accidentally steps on a photograph of himself and hi rocking horse. Realizing how much the horse likes him, he immediately changes his mind.

While the horse struggles to put his rockers back on, the boy aims his controller, and the horse assumes he's going to press the start button to begin playing, but instead, he hits the power button, turning the game off. The boy, dressed up in cowboy attire, smiles at the hosre, and gleefully jumps onto it. The horse begins to run around the house, and the boy lassos the doorknob to the front door, opening it, and running out the house. As they ride away, the scenery transitions to the wild west, ready to go on an adventure. 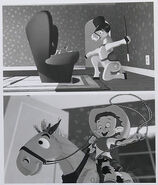 Retrieved from "https://disney.fandom.com/wiki/Off_His_Rockers?oldid=3485567"
Community content is available under CC-BY-SA unless otherwise noted.