"Okay Karaoke" is the second segment of the fifty-fourth episode of Big City Greens.

When the Greens go out for karaoke, Tilly struggles to decide what genre of music will best express her true self.

The Greens and Remy are out at a karaoke bar to try their hand at singing some songs. As they look through the song selection, Tilly voices her worry over trying to find the right song to suit her character. They are visited by the proprietor of the bar, ironically named Kara Karaoke, who drops off some words of wisdom to help them decide on what they should pick when it comes time to sing. As Tilly begins to panic over the song selections, Bill suggests that they help find one for her. He responds by singing about his first love, which is actually his Kludge pickup truck ("Can't Never Give Up (My Pickup Truck)")

While Tilly applauds the song, she feels that it is not for her. Nancy unveils her preference for a song that allows one to let loose and goes up next ("Back Off!"). Bill finds the song unsuitable, Cricket found it exciting while Gramma Alice despised it entirely. Stuck in her ways, she goes up next and explains how the old songs were better than the newer ones ("Ask My Kazoo"). Understandably, nobody likes it. Tilly wants a song with lyrics that suit her, but Cricket and Remy tell her that there is no need to as the song should just sound good in general ("Thinking Is Hard"). Tilly is still unsure of what song to sing and soon the other patrons demand that she hand the song selection pad over. She panics and rushes into the bathroom.

Tilly sulks to herself over her insecurities and inability to pick a song. The family speak with her through the door to try and get her to come out. Cricket steps up and tells her bluntly that the "perfect song" she is looking for does not exist. To Bill's surprise, this works as Tilly comes out to perform a completely original song that she made up on the spot with everyone joining along ("Sing My Song"). Everyone congratulates Tilly for her amazing song with Kara also adding some praise. Cricket asks for a prize, but Kara tells her there is none and the family leave. A Ska Guy, who had earlier asked to go up next, excitedly takes the stage. 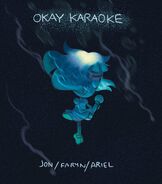