The Avengers: Earth's Mightiest Heroes
What If...?

General of the Dora Milaje
Member of the Avengers

W'Kabi (husband)
Okoye is a Marvel Comics character who appears in Black Panther, Avengers: Infinity War and Avengers: Endgame, played by Danai Gurira. She is general of the Dora Milaje, a special kind of bodyguard dedicated to protect T'Challa from all danger. For that end, she is at the peak of physical and mental condition, being an expert at hand-to-hand combat, a master of several martial arts, and has a gifted mind. Okoye is also a close friend of T'Challa.

Okoye is one of the heroines who survived the snap. She then joins the rest of the heroes in their fight against Thanos and his army of Chitauri, Outriders and the Black Order.

Okoye was created by Christopher Priest and Mark Texeira. 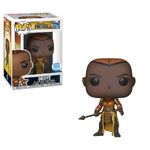 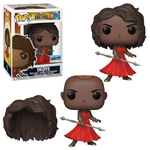