Pepper Ann's friend from camp, Brenda, is moving to Hazelnut, but when she arrives, she finds that Brenda hasn't changed much since they were eight. P.A. now finds Brenda very annoying and possessive and tries to find a way to escape her.

Pepper Ann reminisces on her time at Cubby Camp where she met her friend Brenda who, according to her, stuck by her side through thick and thin and was mutually saddened when they left. She tells Milo and Nicky that she is excited to learn that she is moving to Hazelnut and that she plans on catching up with her. As soon as Brenda gets off the bus, Pepper Ann is shocked to find that she still acts very childish and is somewhat annoying. Brenda immediately puts off Nicky and Milo due to her disliking towards books (which she says is a boring version of TV) and the arcade (which she says she could think of better things to do). Pepper Ann excuses herself by claiming that she has to babysit Moose, but Brenda follows her anyway and runs into Pepper Ann's mom Lydia who suggests that they have a sleep over, which devastates Pepper Ann.

The next day at school, Pepper Ann tries to get Milo and Nicky to help her with Brenda, who had just recently joined the cheer leading squad, but they once again abandon her. Pepper Ann continues to try and outrun Brenda, but she comically manages to catch up with her in almost implausible ways. In a fantasy, Pepper Ann tries to outrun Brenda whose face and likeness are everywhere with multiple versions of her showing up. The sequence ends with her waking up from surgery to discover that her face has been made to look just like her, much to her horror. She next tries to on purposely get herself sent to detention, but Brenda has herself get sent to detention as well to join her.

After school, Pepper Ann has a conversation with her reflection about her telling the truth to Brenda of which she feels really guilty about. She finally surmises the gumption to tell Brenda, but to her surprise, Brenda has something to say too: she thinks that Pepper Ann has changed while she herself has "grown up" and made new friends with Tessa and Vanessa James. Pepper Ann is heartbroken and betrayed by the news and quietly hums the annoying song that Brenda had sung throughout the episode while photos of false happy moments with Brenda are shown much to Milo and Nicky's chagrin and confusion. 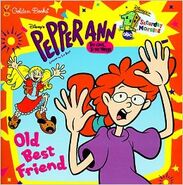 Cover to the book adaptation.
Add a photo to this gallery

Retrieved from "https://disney.fandom.com/wiki/Old_Best_Friend?oldid=4232273"
Community content is available under CC-BY-SA unless otherwise noted.