Knowing a lot of things, science

Her knowledge
Olivia "Olive" Daphne Doyle is the deuteragonist of the Disney Channel series, A.N.T. Farm. She is a human computer prodigy. Thanks to her eidetic memory, everything she's ever read, heard, or seen is permanently etched into her brain. Unfortunately, there are some things she would rather forget. Olive is always ready with a fact about pretty much everything, is somewhat of an over-thinker. She'd much rather hide in the safety of the A.N.T. Farm, but her new best friend Chyna, is not going to let that happen. Her catchphrase is "Interesting factoid". She is portrayed by Sierra McCormick.

Olive is very organized. She puts everything she stores in a perfect alphabetical system, and is disgusted by disorganization. She is afraid of many of the older students at Webster High School, and often wants nothing to do with them. Some people may find her annoying due to her random facts and talkative nature. She seems to be rather manipulative as seen in many episodes. She is also a bit clueless of her actions as noted in The PhANTom Locker. She is multilingual because she has photographic memory. She seems to enjoys things that most students don't, such as trigonometry,calculus and other difficult subjects.Olive is a very smart student she loves to do everything in a specific order that it surpose to be done in.. Therefor she thinks thats how it surpose to be every single time she does some kind of computer work or school work.

In TransplANTed, Olive was the first A.N.T. that Chyna met at Webster High. After Chyna greets her, Olive immediately starts giving facts about China's dynasties. Olive, then introduces Chyna to Fletcher, who she says has to literally "make friends" which she means he has to make them out of wax. Once first period ends, she freaks out. Chyna, Fletcher, Angus, and Olive then run into the hallway. Chyna asks Olive why it's so important when this period ends, but the big kids then flood the halls, and they all run. When Angus gets caught in the rush, Fletcher suggests they go back for him, but Olive slaps him, shouting, "He's gone!"

When Chyna wants to audition for the school play, Olive protests due to the fact that Lexi always gets the lead role, and that they shouldn't anger the "big kids". Chyna then tries to get the jumpy Olive through the rest of the day. When they go back to Chyna's locker to get her lunch, Olive says they shouldn't leave the safety of the A.N.T. Farm. The big kids then swarm through the halls, to Olive's fear. Chyna then leads her into a nearby locker, which protects them from the stampede of teens. Later, when Olive arrives at Chyna's for the party, she is dressed in a sparkly red dress with yogurt stuffed in her chest, trying to look older. When Chyna's dad returns home early, Olive acts poorly as Eliza Doolittle to back up Chyna's story that they were supposed to be studying Pygmalion for English Class. At the party, Olive wants to leave right away, but decides to stay when she sees cookies. When she starts dancing, the yogurt in her dress starts to move, causing her to have a chest on her back. Later, when she wants a juice box, Lexi gives her Red Viper instead, which causes her to be very hyper and not able to feel her feet. She then accidentally knocks into Fletcher, who knocks into the sound system so that the music turned off. When Lexi threatens them for ruining her party, Olive mocks Chyna when she said they should go to a high school party. While Chyna starts singing to save the party, Olive flips on and off a bunch of lights so it looks cool. While she and Fletcher apologize for turning on Chyna, Olive says it was the Red Viper talking, and that "that stuff is bad news." When Chyna is taken away by her dad and Lexi wants Olive and Fletcher out of her house, they protest, only to have Olive's yogurt explode all over Lexi. Olive says she knows how to get the stains out, and that she'll text her the "deets" meaning details before rushing out of the house. The next day, Olive notices music equipment in the A.N.T. Farm, which is revealed to have been set up by Chyna. Fletcher embarrasses himself again, pretending to be frozen, and Chyna asks Olive if he knew they could see him. Olive responds by saying, "I really don't know what he knows at this point." Later in the hallway, Olive suggests eating at the cafeteria since the cop situation gave the A.N.T.'s some serious street "cred" (meaning credit), and scares off a couple of older guys by jumping into them.

In ParticipANTs, when Chyna tries a sandwich from the Club Sandwich Club, Olive smacks it out of her hands. She then describes the school as a jungle, with them being innocent little gazelle stopping to drink in a river and the big kids being crocodiles that can snap and bite their heads off. Chyna tells Olive that should stop watching nature specials, and Olive laughs over the fact that they show animals poop sometimes. When they spot Lexi at the cheerleading sign up, Olive gets scared because they don't have any "natural camouflage abilities." They then wear masks from a nearby table to sneak by, but they get caught immediately. When Lexi suggests that Chyna should try out for cheerleading, Olive tells her "not stop to drink." When Chyna wants to sign up, Olive throws the pen away and it lands in Gibson's hair. At the A.N.T. Farm, Olive says that she isn't going to try out since she is a feminist, and because she's scared of the older kids. However, Chyna is able to convince Olive to try out with her. At the try outs, Olive does a very long cheer in honor of the Webster Wolf, which Lexi uses for a report (she gets an A+). Lexi declares that she hates Olive before Chyna does her cheer, ending up with Paisley getting kicked in the face. Later, when Lexi tells Chyna that she made the squad and Olive didn't, Chyna knocks Olive into a locker. Chyna then runs off to get her uniform with Lexi and Paisley, which is when Gibson shows up to offer a tissue to an upset Olive. Later in the A.N.T. Farm, Olive gets angry when Chyna won't stop talking about cheerleading. Olive can't believe Chyna is making friends with Lexi, and then hangs out with Angus, who randomly starts to play romantic music, causing Olive to creep away. The next day, Olive cornrows Gibson's hair, and finds actually corn in it. Gibson tells her that she's being judge-y so he tells her to find someone else to play with, causing Angus to once again play romantic music. Chyna then shows up with a lot of injuries and acts out what happened for Olive since she can't speak. At first Olive thinks that she was at the airport helping planes land and the Union guys beat her up, but Chyna uses Angus' Voice App to explain that Lexi tricked her and made her work too hard, causing her to get hurt. Chyna then apologizes to Olive and they make up. When Chyna gives up on play auditions, Olive encourages her to try. Olive later wants to join the End Hunger Today Club, but Principal Skidmore kicks her out saying they're full because she doesn't want Olive to have any of her buffalo wings.

In The PhANTom Locker, Olive moves into the locker next door to Cameron's. She constantly greets him with a squeaky "Hi, Locker Neighbor!" Cameron confronts Chyna about this due to the fact that Olive thinks that Cameron is her friend since he is Chyna's sister. To get back at Olive, he convinces Olive to think that her locker is haunted. In order to help Olive get rid of the "ghost", Chyna brings Olive to school at night. However, when they enter the locker to face their fears, they hear something spooky and Chyna tries to give up Olive to the ghost since it's her locker.

In SciANTs Fair, Olive finds a wedding dress in a box saved for Olive's Big Day. She misunderstands the wedding box, thinking "what could be bigger that a science fair?". She cuts the dress up and uses it to build a remote controlled zeppelin.

In StudANT Council, Olive tricks Chyna into running for A.N.T. Representative so that she wouldn't have to do it. She claims that she panicked because she was afraid of heights, mirrors, and balls.

In Bad RomANTs, Olive is seen helping Fletcher with his sculpture of Chyna. She was also seen taking pictures and gathering information for the school newspaper.

In The InformANT, Olive and Fletcher help Chyna get a new designer bag by collecting pudding cups.

In ReplicANT, Olive challenges Cameron to a Donkey King tournament. She is so good at the game because she is able to use her eidetic memory to memorize the game patterns.

In ManagemANT, Olive teams up with Angus to compete against Fletcher and Paisley in a home economics challenge hosted by Principal Skidmore. Olive and Angus end up winning the challenge for a romantic dinner for two, but Olive refuses to go on the date with Angus. This is also the first episode where Olive never interacts with Chyna.

In PhilANThropy, Olive helps Chyna and Fletcher get Gibson's job back.

In FraudulANT, she helps Chyna, Fletcher and Angus get Fletcher's stolen painting back.

In The ReplacemANT, she becomes the new history teacher.

In IgnorANTs Is Bliss, Olive loses her memory and gets sent back to kindergarten.

In Slumber Party ANTics, Olive goes to Chyna's slumber party. She helps Chyna deceive Lexi into thinking they have a lot of people at their sleepover.

In America Needs TalANT, she and Paisley appear on the game show called The Brainy Bunch but has to go with Paisley due to partner's week.

In SANTa's Little Helpers, she and the other ANTs make toys for orphans. After finding out that Skidmore was selling them, she, with Chyna and Fletcher, try to teach Skidmore a lesson.

In You're the One I WANT, Olive comes up with an Ancient Greece play for Chyna and Jared to perform.

In PerformANTs, Olive, with Chyna, Angus, and Fletcher plan on going to a Blood Butcher concert.

In Some EnchANTed Evening, Olive makes Chyna go on a double date with her and Jared and Fletcher and Ella.

In PatANT Pending, she and Chyna compete over who's backpack invention is the best.

In Ballet DANTser, she joins Chyna's ballet class to calm Violet down with Chyna and Fletcher. 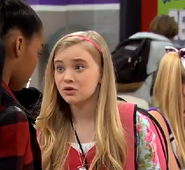 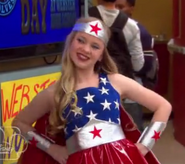 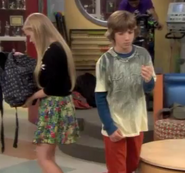 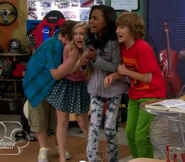 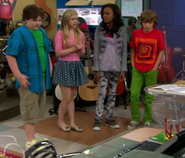 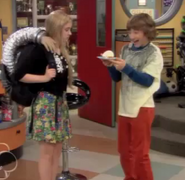 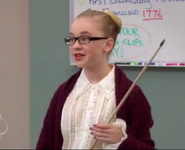 Add a photo to this gallery
Retrieved from "https://disney.fandom.com/wiki/Olive_Doyle?oldid=3841598"
Community content is available under CC-BY-SA unless otherwise noted.