Lily, George, and Claire
Oliver James Platt (born January 12, 1960) is a Canadian-born American actor who is best known for his role as Paul Jamison on the Showtime comedy-drama series The Big C since 2010.

He is known in Disney for playing Porthos in Disney's 1993 film, The Three Musketeers and Paul Bunyan in Disney's 1995 film, Tall Tale. Genie was often seen transforming into his role as Paul Bunyan in the Aladdin animated series and once as Porthos. He also posed as the Mad Hatter in "Where Wonderland is Your Destiny" in the Disney Dream Portrait Series. He also played Fulvio Nesstra in Gun Shy, Ben Goodrich in Simon Birch, Rupert Burns in Bicentennial Man, Tommy Fawkes in Funny Bones and Paprizzio in Casanova.

Genie as Paul Bunyan again in another Aladdin episode 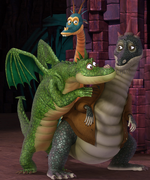 Everburn in Sofia the First: The Curse of Princess Ivy
Add a photo to this gallery
Retrieved from "https://disney.fandom.com/wiki/Oliver_Platt?oldid=1782575"
Community content is available under CC-BY-SA unless otherwise noted.