2009–present
Olivia Hastings Holt is an American actress, voice actress, and singer, best known for playing the role of Kim Crawford on the Disney XD series Kickin' It, and starring in the Disney Channel Original Movie Girl vs. Monster. She also portrayed Lindy Watson in I Didn't Do It, and voiced Spider-Girl (Petra Parker) in Ultimate Spider-Man, Morgan in Tinker Bell and the Legend of the NeverBeast, and played Dagger in Marvel's Cloak & Dagger.

Holt was born in Germantown, Tennessee, to parents Mark and Kim Holt. She has a younger brother named Cade and an older sister named Morgan Toll. At age 3, her family moved to Nesbit, Mississippi where she grew up after briefly living in Memphis. Holt has long enjoyed gymnastics and cheerleading. She currently resides in Los Angeles, California with her family.

Holt auditioned for Disney XD's martial arts show Kickin' It, which premiered in 2011. Possessing skills in gymnastics, she received a call back from the producers and joined the cast in the same year. She has appeared as a regular until season 3, because in season 4 just appear in 2 episodes, portraying the role of Kim. Holt starred in the Disney Channel Original Movie Girl vs. Monster. She plays the lead character Skylar Lewis, a teenage girl that discovers her family have long worked as monster hunters, and she's next in line. The film premiered in October 2012. She recorded three songs for the movie, released as a part of the Make Your Mark: Ultimate Playlist. She also recorded her version of "Winter Wonderland" for the Disney Channel Holiday Playlist album in 2012. She portrayed Valentina in The Evermoor Chronicles.

From early December 2014 to early January 2015, Holt portrayed Princess Aurora (AKA Briar Rose) in the stage musical Sleeping Beauty and Her Winter Knight, at the Pasadena Playhouse.

She also sang "You've Got a Friend in Me" with Jordan Fisher to promote the Pixar Fest at Disneyland Resort. 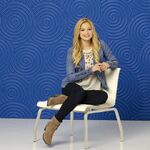 Lindy Watson
(I Didn't Do It)

Wacky Jackie
(Dog With a Blog)

Morgan
(Tinker Bell and the Legend of the NeverBeast)

Dagger
(Marvel Cinematic Universe)
Add a photo to this gallery

Retrieved from "https://disney.fandom.com/wiki/Olivia_Holt?oldid=4565210"
Community content is available under CC-BY-SA unless otherwise noted.