"Olm Town Road" is the second segment of the fifty-second episode of the Disney Channel animated series, Amphibia.

Anne and her friends search for the city of Proteus.

The Resistance gets together to discuss what to do after having destroyed Andrias' factories and taken out his bases. Anne suddenly remembers that they found a message back on Earth that tells them to find the Mother of Olms. Sprig and Polly remember that the only olms they have encountered are Lysil and Angwin from Quarreler's Pass, so Anne, Sasha and the Plantars head there, only to discover drills everywhere on the path. They go into a cave and find the two headed olm whom they immediately demand answers from. The two admit that they could find the Mother of Olms in the city of Proteus, but they were banished for their bickering causing the near destruction of of the city. Luckily, they decide to help them out.

They find the city and are taken to meet Parisia, an elder olm who refuses to take them to see the Mother of Olms. She has the entire city in denial over the tremors caused by the drills and has everyone convinced that they are simply earthquakes that will pass soon. She banishes the group again, but when the tremors get worse, they rush to the surface. Anne, Sasha and the Plantars try to stop the drill and tell Lysil and Angwin to wait inside the cave as sunlight hurts the olms. They fail to turn off the machine, forcing Lysil and Angwin to both agree to rush to the surface and destroy the drill themselves; falling through the ground and back into the city.

Despite the obvious proof, Parisia is still in denial and accuses the heroes of making it all up. Sasha, having had enough of her claims, yells at her. She empathizes with Lysil and Angwin's plight as she knows what it is like to not be given another chance and calls her a "snooty despot" for not acknowledging the twins heroism. As they prepare to leave, Parisia stops them and admits that she is impressed with how Sasha talked back to her as no one had done that in years. She finally decides to allow them to see the Mother of Olms and, reluctantly, bring Lysil and Angwin back in, under the condition that they be supervised. Anne and Sasha give each other a fist bump. 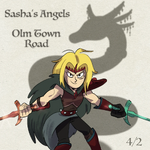 the underground city of olms Proteus

Sasha telling Lysil and Angwin that she also knows what it's like to make mistakes and live with regret.

The Drill about to reach Proteus

Lysil and Angwin charging at the Drill.

The Group a granted a meeting with Mother Olm