Isolation, being kidnapped, losing her friends, being alone, being used as an experiment

Jango Fett † (genetic template)
Omega is the only female clone of Jango Fett and one of the main characters of Star Wars: The Bad Batch.

Omega, similar to Boba Fett, is an unaltered clone of Jango Fett with none of the genetic modifications that the Clone Troopers have.

Omega is first seen during the Proclamation to a New Order was being broadcast after Order 66. She later introduce herself to the rest of the Bad Batch before being interrupted by her medical mentor, Nala Se who has come with her to do some assignments. She later join them during lunch and their food fight with the regular clone troopers. Omega tried to join the Bad Batch on their physical test for Tarkin but was turned down. She joins the Prime Minister and Nala Se in their conversation with Tarkin about future cloning, more about the Bad Batch's history, and the Jedi.

When Omega hears from Tarkin that during Order 66, there were reports of the Bad Batch not killing Jedi Padawan Caleb Dume, she heard Tarkin announce he plans to set a test of loyalty for The Bad Batch, making her feel worried. Omega tried to warn the Bad Batch's leader, Hunter of Tarkin's plans for them, but he believes she is just anxious about the recent changes since the formation of the Galactic Empire. Omega then watched the Bad Batch leave before returning inside the Kaminoan facility with Nala Se. After taking a tour of the Bad Batch's sleeping quarters she was thrown in prison along with the Bad Batch after they defect and came to rescue her. She helps to break out of prison and escape from Kamino.

Seeing dirt for the first time 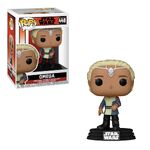