Disney Wiki
Register
Don't have an account?
Sign In
Advertisement
in: Television episodes, Star vs. the Forces of Evil episodes

Star vs. the Forces of Evil
"On the Job"

Buff Frog has to complete an important mission in order to care for his kids.

Buff Frog is happily raising his tadpole children when he suddenly realizes that he has no food to feed them with. Desperate, he calls up his friend Boo Fly about a job. Boo Fly is uncertain if he is up for it, especially since he is a father now, but Buff Frog insists that he is still "evil" and is willing to take on anything. He makes a quick stop to Earth to have Star and Marco babysit his kids and returns to Mewni where he tries to get over the feeling of being away from them. He meets up with Boo Fly who introduces him to the team (consisting of Dogbull and an unnamed female porcupine and a tortoise-bird creature). Dogbull challenges Buff Frog who responds by giving him a wedgie. As they face off, Boo Fly tells them to calm down so that they can perform the job. They discover the rats from the bar passing corn to one another in secret which alarms Buff Frog as that means that the rats have successfully nicked the corn from the Mewmans without informing the monsters. The group resolves to kidnap and interrogate one of the rats.

As Buff Frog manages to grab one of the rats, he suddenly envisions one of his babies and accidentally drops him. The others witness him and grab the rat before he flees. Boo Fly checks on Buff Frog who claims that he is fine. Next he attempts to torture the rat, but once again has another vision. Boo Fly helps him out by taking the rest of the team away so Buff Frog can work in private. He cannot overcome his desire to be with his children, so he "tortures" the rat by showing him pictures of them. He even attempts to call them (unaware that Star and Marco are trying to give them a bath) and he ultimately lets the rat go. Dogbull angrily confronts Buff Frog after seeing this, but Boo Fly covers for him by saying that he did it so that they can follow him to the source. He later, privately tells him that he will not protect him afterwards. The team finds the route, but as they prepare to attack, Buff Frog accidentally pulls out some noisy baby toys that scare the rats away. The team finally turn on Buff Frog and send him away while they go search for the source.

Buff Frog gets his motivation back once he checks his phone and realizes that they are counting on him. Boo Fly and the team find a corn field in front of Mewni Castle and run to it, only to find a giant force field around it. They discover a small hole and as they try to go through it, River Butterfly catches them and attempts to hit them with a flame spell, but accidentally creates a giant flame ring around the area. As the team panics, Buff Frog arrives and rescues them and they all gracefully thank it and admit they were wrong. Buff Frog tells them that their mission was not a failure as they now know how the rats are getting the corn. He then happily leaves back to his children with Dogbull stating that he wants to talk to his dad now. Meanwhile, the rats are cultivating the corn and taking back to their leader: Ludo. 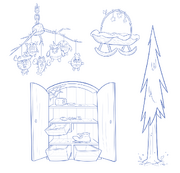 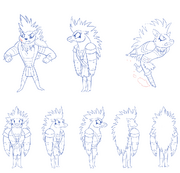