Once Upon a Time Adventure

Once Upon a Time Adventure
漫游童话时光

Once Upon a Time Adventure is an attraction that is part of Fantasyland in Shanghai Disneyland. It is an interactive walkthrough attraction themed to the Disney animated classic, Snow White and the Seven Dwarfs. It was first revealed at the 2015 D23 Expo.

This attraction is similar to the Sleeping Beauty Castle walkthrough attraction in California, but instead themed to Snow White and has more of an interactive feel to it. This attraction has a special meaning since the film premiered on February 8, 1938 in Shanghai, and was one of the first Disney properties to be introduced to Chinese audiences.

Guests climb a magnificent winding staircase in the middle of the Enchanted Storybook Castle, and pass through a "Magic Mirror" portal and into the world of Snow White, where through animated scenes they'll get a chance to meet Snow White herself and all of her friends, witness the wicked deeds of the Evil Queen, and the glory of Snow White's dreams being realized, with the latest in realistic interactive technology. 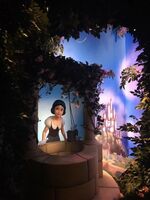