Once Upon a Wintertime

Once Upon a Wintertime

English
Once Upon a Wintertime is an animated short from the film Melody Time. It was reissued as a stand-alone short on September 17, 1954.

A December valentine features the memories of a romantic couple in their courting days. Joe tries to show off for Jenny on the ice, but events soon turn to a possible tragedy and a timely rescue.

In the wintertime, a couple goes on a sleigh ride throughout the winter while two rabbits and two bluebirds join them on their sleigh. Arriving for a stop, Joe takes his love interest Jenny to go ice-skating with the other ice-skaters. Joe and Jenny go ice-skating across the frozen lake as the two fall in love. Skating deep into the forest, Jenny then gets upset with Joe and leaves him (the female rabbit also gets upset with the male rabbit, just like what Jenny did to Joe). Joe wants to get Jenny's attention but she refuses.

Both, Joe and Jenny disagree with each other until Jenny does not notice a thin ice area. Jenny ignores the warning sign along with the rabbit's love interest until he angrily smashes the ice to cause trouble. Joe and the boy rabbit notice their love interests are in danger so the two attempt to rescue her. Jenny almost falls off a waterfall but the horses, squirrels, and bluebirds work together to rescue the two in danger. Reuniting Joe and Jenny together along with the rabbits, both fall in love as they ride on their sleigh together. Joe and Jenny bid a farewell to the woodland creatures as the two sleigh happily together.

Main article: Once Upon a Wintertime (song)

Jenny having her back turned on Joe

Jenny seeing a crack in an icehole

Jenny fainted on an ice floe 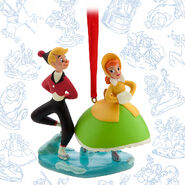 Once Upon a Wintertime Limited Release Sketchbook Ornament - December 2016 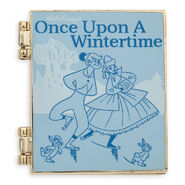 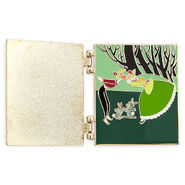