Mater and the Ghostlight
One Man Band is a 2005 Pixar animated short film. The short was written and directed by Andrew Jimenez and Mark Andrews and produced by Osnat Shurer, head of Pixar's Shorts group. It was shown with the theatrical release of Cars.

The story begins with a man, named Bass, playing multiple brass and percussion instruments, and tries to get a little girl named Tippy to tip him a coin, but soon meets another musician, named Treble with orchestral woodwind and string instruments. They both instantly become rivals and fight over the girl's coin until she accidentally drops the coin, which falls into a drain. Tippy gets upset and is then angered by the two musicians causing her to lose it, and demands the two one-man-bands for a replacement coin, but they reveal that they are poor and broke. She takes one of the violins from the Treble, re-tuned it, and played an unexpected tune. A rich man, pleased by her performance, gives her a big bag of coins, and the girl eagerly picks it up. Before leaving, Tippy takes two coins for Bass and Treble and tosses them into the top of a fountain, where she was originally going to put her coin in for a wish. After the credits roll, the two musicians work together in an attempt at reaching the top, where the two coins remain. 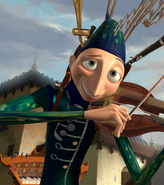